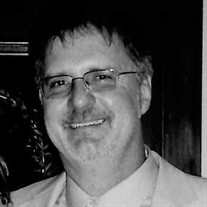 Mark Alan Bowers, 57, of Hardin, Illinois, passed away peacefully with his family by his side on Monday, December 13th at Barnes Jewish Hospital in St. Louis. Mark was born on July 24th, 1964 in Jerseyville, Illinois to the late Joseph and Beverly Bowers. He is survived by his wife, Shelly and their two sons, Evan (Kristen) and Mitchell (Leigha). He is also survived by his sisters, all of which were his favorite, and their spouses: Carrie (Bernie) Wallendorf, Debbie (Bob) Simon, Shelly (Kenny) Sievers and Kris (Kevin) Blumenberg, mother in law Shirley Blumenberg, and sisters-in-law Connie (Chris) Johnes and Sharon (Jeff) Kassing and his four-legged companion, Maggie. He has numerous nieces and nephews, great nieces and nephews and friends who also love him and will miss him terribly. He was preceded in death by his parents, his nephew Derek Blumenberg and father in law, Jerry Blumenberg. Mark was a lover of many things; first and foremost his family. His beloved dogs came in a close second and he was notorious for his sense of humor and joking spirit. He would often joke that if the cancer didn’t kill him, it would be his wife Shelly’s driving. He loved music, riding his Harley, Coors beer and giving coordinating Christmas gifts to his nieces, which they always looked forward to. He felt that driving directions were just another man’s opinion; a quality that he likely inherited from his Dad, Joe. He was giving, compassionate and always wanted to make sure that people left his company with a smile on their face. His positive attitude, unwavering faith and adventurous spirit sustained him through his cancer diagnosis, treatment and ultimately his last earthly moments. Visitation will be held Sunday, December 19th from 4-8 p.m. at Gress, Kallal and Schaaf Funeral Home in Hardin. A funeral mass will follow on Monday, December 20th at 10 a.m. at St. Norbert’s Catholic Church in Hardin. A private burial will take place at a later date. Memorials may be made to Riverbend Humane Society and Calhoun JFL Football Team.

Mark Alan Bowers, 57, of Hardin, Illinois, passed away peacefully with his family by his side on Monday, December 13th at Barnes Jewish Hospital in St. Louis. Mark was born on July 24th, 1964 in Jerseyville, Illinois to the late Joseph and... View Obituary & Service Information

The family of Mark A. Bowers created this Life Tributes page to make it easy to share your memories.

Send flowers to the Bowers family.