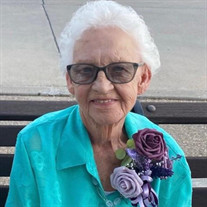 Marilyn “June” Lehr, age 88, of Kampsville, Illinois, passed away Sunday, May 29th, 2022, at Thomas H. Boyd Memorial Hospital with family by her side. She was born on June 26th, 1933, to Earl and Mae (Coonrod) Newnom and was one of four children. June graduated from Eldred High School class of 1951. On October 2nd, 1954, June married her husband Elmer and had six children: Sandy, Sharon, Bobby, Diane, Jim, and Rich. In her younger years June waitressed at the Circle Inn and the Kampsville Inn. She later took on the role as a caretaker for her mother, younger sister, and mother-in-law. In her spare time June enjoyed spending time with her husband, watching his softball games and playing cards. But she especially loved the time spent with her kids and grandkids and attending their events and sports games. She was a former member of the Altar Society and the Auxiliary Women of the American Legion, she volunteered to help with fundraisers for the North Calhoun Fire District. She loved to attend auctions and collect antiques. June never missed a chance to use her quick wit to tease and joke with her family and friends; she had a great sense of humor and the ability to make anyone laugh. June was preceded in death by her husband Elmer W Lehr, her eldest son, Bobby, her parents Earl and Mae Newnom, brothers Edward and Bill Newnom and sister Shirley Newnom. She is survived by daughter Sandy Jentsch (Dan), daughter Sharon Hagen (Al), daughter Diane Holland, son Jim Lehr (JoAnn), and son Rich Lehr (Liz). Also survived by 11 grandchildren: Amy, Alicia, Lucas, Ben, Logan, Douglas, Leigha, Brittany, Lexis, Macie, and Madison. And 9 great grandchildren: Thomas, Allison, Tanner, Liam, Hadley, Kylie, Lila, Stella, and Owen. The family would like to thank the staff at Boyd Hospital for their excellent care in her final days. A graveside service will be held Friday, June 10th at 11 AM at Saint Anselm’s Cemetery for family and friends. Gress, Kallal & Schaaf Funeral Home is entrusted with professional services. Memorials are suggested to Thomas H. Boyd Memorial Hospital or Calhoun County Ambulance Service. Online condolences and guestbook can be found at www.eliaskallalandschaaf.com.

The family of Marilyn "June” Lehr created this Life Tributes page to make it easy to share your memories.