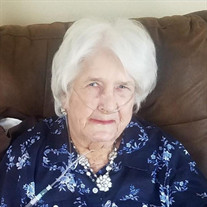 Dateline: Bethalto On Thursday, May 26, 2022, Magdaline L. Stewart, age 89, was called to Heaven. Magdaline was born on February 6, 1933, to Alfred and Nina (Thomas) Cato. She was one of six children. She was preceded in death by two brothers, Curtis and David; and two sisters, Viola and Juanita. One sister survives, Nadine Schildroth of Godfrey. She loves her sister deeply. On December 27, 1950, she married Willis (Bill) Stewart in Pocahontas, AR. He preceded her in death in January of 2009, after 57 years of marriage. Together they had eight children. Things weren’t always easy, but they always provided everything needed for their children. Magdaline’s most painful moments in life were losing three of her adult children. She was preceded in death by her daughter, Patricia (Stewart) Bryson; and two sons, Jerome (Jerry) Stewart and Darrell Stewart. Her love for them was unconditional and the pain of losing them was never ending. In addition to her sister, Nadine, and brother-in-law Charles and their family, she is survived by five children. Karen and her husband Verleon Jones of Wood River, Marilyn Grable of Bethalto, Kenneth and his life partner Phyllis Scroggins of Cottage Hills, Steven Stewart of Bethalto, and Tony and his wife Kelly Stewart of Florida. Magdaline’s daughter-in-law, Patricia Stewart, also survives. She was also preceded in death by two special sons-in-law, Kim A. Grable and John R. Payne. Magdaline is also survived by 13 grandchildren, Cassy, Holly, Jessica, Alessa, Alex, Dee, Jerry Lee, Melissa, Jason, Joshua, Nathan, Darren, and Michael. Magdaline was blessed to also have 18 great-grandchildren and one great-great-grandchild. She cherished every moment she had with each and every one of them. She is also survived by countless nieces, nephews and cousins. Magdaline enjoyed her flower gardens, canning fruit and vegetables with her husband, fishing, shopping, sewing, and time spent winning money while gambling. Most of all she loved her family. She was absolutely the best mother we could have ever had. We will miss her to the depths of our souls. A visitation will be on Tuesday, May 31, 2022, from 10 am until time of service at 12 pm, at Elias, Kallal and Schaaf Funeral Home in Bethalto. Pastor Walter McCaslin will officiate. Burial will follow at Rose Lawn Memory Gardens in Bethalto. Memorials may be made to St. Jude Children’s Hospital and/or The American Kidney Foundation Online condolences and guest book may be found at www.kallalandschaaf.com

Dateline: Bethalto On Thursday, May 26, 2022, Magdaline L. Stewart, age 89, was called to Heaven. Magdaline was born on February 6, 1933, to Alfred and Nina (Thomas) Cato. She was one of six children. She was preceded in death by two brothers,... View Obituary & Service Information

The family of Magdaline L. Stewart created this Life Tributes page to make it easy to share your memories.

Send flowers to the Stewart family.