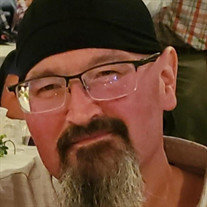 Dateline: Bethalto Lewis “Lew” Bradford of Brighton passed away at 9:45 p.m. on Thursday, October 7th at the age of 54. He was born in Decatur, IL on September 5, 1967, and was one of five children of the late Carlton “Bud” and Barbara Ann (Heiserman) Bradford. He graduated from Roxana High School in 1985 and worked for Community Wholesale Tire as a tire adjustor for over 30 years. He married the love of his life, Paula Barton (Kelley) on November 23, 2019. She survives. He also leaves behind his children, Jacob Barton of Alton, and Joshua Barton (Bekah Dedear) of Godfrey, a granddaughter, Elsie Kay Barton, of Godfrey, sisters Justine Leverett (Rick Leverett) and Charmagne Selph (Don Selph) and brothers Jim Kendig of Moro and Tom Bradford (Laura Bradford) of Montgomery City, MO, two nieces, one nephew, and ten great nieces and nephews. Lew was a big man in stature and in spirit. He was polite and considerate to every single person he met without fail and as genuine as they come. He was the kind of person who valued friendship and the many lifelong friendships he made. To him, he didn’t have friends, because every friend was a member of his family. He would give gifts for no reason at all or just because you might have mentioned in passing something you liked or needed or just wished you had. His greatest pleasure was watching your face when you opened it and how happy it made you. He never asked for anything in return. He loved spoiling his granddaughter, Elsie Kay, and riding his Harley Davidson with his wife, Paula, who he lovingly called his “Sweetybug.” He also loved hosting bonfires at his home with family and friends. A visitation will be held at Elias, Kallal & Schaaf Funeral Home in Bethalto on Friday, October 15, 2021, from 4:00 p.m. to 7:00 p.m. with a short ceremony to begin at 7:00 p.m. A celebration of life will be held at a later date. To honor Lew's memory, friends and family are encouraged to wear their Harley attire as well bring their bikes to the visitation. In lieu of flowers, you may make a donation to the National MS Society, Gateway Area Chapter, 12125 Woodcrest Executive Drive, Suite 320, St. Louis, MO 63141. Online condolences and guest book may be found at www.eliaskallalandschaaf.com

The family of Lewis "Lew" Bradford created this Life Tributes page to make it easy to share your memories.

Send flowers to the Bradford family.