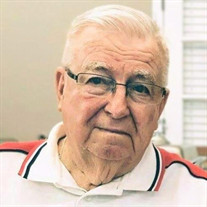 Dateline: Moro, IL Lewis Karl Hauser, Jr., 91 of Bethalto, Illinois died peacefully surrounded by family on Saturday, November 28, 2020 at River Glen Hospice in St. Charles, Illinois. Lew was born on May 23, 1929 in West Terre Haute, Indiana to Lewis Karl, Sr. and Helen Marie Hauser. He married Dolores Ann Corbett on June 20, 1952 at Stewart Air Force Base in Newburgh, New York. Lew attended Bethalto schools but graduated from Roxana High School in 1947 as Bethalto did not have a senior year. He received his bachelor’s degree from Shurtleff College, a master’s degree from the University of Illinois and his educational specialist from SIUE. Lew’s life was the Bethalto Community School District where he served for 35 years. He was educated there, taught at the high school, coached, and was principal at both Cottage Hills Elementary and Wilbur Trimpe Jr. High. He served as the assistant superintendent and finalized his career as superintendent of schools. He was well-known statewide for his expertise in school finance. Seeing the need in the local communities, he became a champion and leader in the formation of the Head Start program of Madison County in the sixties. Lew had many accomplishments in his educational career but was most proud of leading the team that built the current high school facility and writing the grant which allowed the district to build the football/soccer stadium which now bears his name. He was a long-time member of the Bethalto Rotary and a Paul Harris fellow. The many organizations he donated his time to were, the Bethalto Spirit, Pride Inc., American Legion and was a board member of St. Louis Regional Airport. Lew was a consummate athlete. As a young man, he played all sports and was athlete of the year while attending Shurtleff college. Baseball was his first love. He played the legion circuits in high school and college and was part of the Air Force semi-professional league playing around the country while serving. In his later years, golf was his game of sport playing leagues into his mid-eighties with his educator buddies and many friends in the Riverbend area. Lew was a longtime member of College Avenue Presbyterian/Lovejoy United Presbyterian Church since 1956, where he served as a Deacon and an Elder. He was also deeply involved in their Mariner service program. He served his country as an officer in the U.S. Air Force while stationed in Korea and also stateside. Lew then transitioned to the reserves and acted as an USAF advisor for the Illinois Civil Air Patrol. He retired as a Lt. Colonel. He is survived by his wife of 68 years Dolores (nee Corbett), daughter Cindy Wills (Robin) of Geneva, IL, son Jeff (Beth) of Bethalto, IL, and son Randy (Mara) of Geneva, IL. Grandchildren Jennifer Ambrose, Corey Wills, Ashleigh Rhodes, Matt Wills, Mark Wills, Michael Hauser, Samantha Hauser, and Emily Hauser. Great-Grandchildren, Devin Ambrose, Isabelle Ambrose, Hayleigh Rhodes, Mason Rhodes, Porter Wills, and Penny Wills. He was preceded in death by his father Lewis Karl Hauser, Sr., his mother Helen Marie Hauser (nee Meyers) and his brother Robert Stuart Hauser just five days before him. A memorial in Lew’s name may be sent to Lovejoy United Presbyterian Church, 2550 Rock Hill Road, Wood River, IL 62095. Private funeral services will be held on Tuesday, December 1, 2020 at Elias, Kallal and Schaaf Funeral Home in Bethalto, Rev. Daniel Ervin will officiate. Burial will follow at Rose Lawn Memory Gardens. Online condolences and guest book may be found at www.eliaskallalandschaaf.com

The family of Lewis K. Hauser created this Life Tributes page to make it easy to share your memories.

Send flowers to the Hauser family.