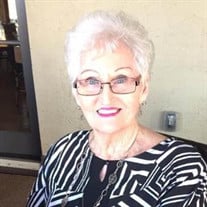 Lenora “Tiny” F. Mitchell, age 91, formerly of West Alton, passed away peacefully Monday, July 5, 2021, at Windsor Estates of St. Charles, MO. Tiny was born June 13, 1930, in West Alton, MO. The daughter of Homer and Elizabeth (Keene) Smith. She married Theodore “Ted” R. Mitchell, the love of her life, on September 25, 1948, in Alton, IL. Ted preceded her in death on January 12, 2011. Tiny and Ted were long time members of Zion United Church of Christ in Florissant. Tiny and Ted loved to socialize, meet new people, and made many friends over the years. They also loved dancing and traveling, including many trips to the Lake of the Ozarks where they boated, fished, and had a few drinks. They bowled for several years and in Tiny’s later years she became a champion “Wii” bowler at Windsor Estates. Tiny worked as a school secretary for Orchard Farm School District for 22 years prior to her retirement in June 1992. She made many friends in the district and touched the lives of so many faculty members, staff, and children. Some of her greatest joys were spending time with her children, grandchildren, and great grandchildren. She always sent birthday cards to all family members and the Christmas season was one of her favorite times to send cards to many friends and family. She is survived by her children and their spouses, Bruce and Vicki Mitchell of St. Charles, Carol Wittman of St. Charles, Gina and Dan O’Brien of St. Louis; ten grandchildren and their spouses, Courtney and Dianne Mitchell, Carrie and Mark Roach, Erin and Adrian Stopke, Adam and Holly Bextermueller, Drew and Shandra Bextermueller, Marie and Eric Strodtman, Alex and Liz O’Brien, Sam O’Brien, Michael and Amanda Butera, Sarah and Jarod Buffington; fourteen great grandchildren, Faith Mitchell; Cooper, Gabi, Clinton Doza; Ted, Ben, Luke, Aidan Stopke; Max, Mason, Miles Bextermueller; Tyler, Jase, Anna Bextermueller; her sister Frances Jacoby of Godfrey, sister and brother-in-law Bill and Helen Fair of East Alton, sister-in-law Joyce Mitchell of Callao, MO; and many nieces, nephews, cousins and friends. In addition to her husband Ted, she is preceded in death by her parents, her son Thomas R. Mitchell and son-in-law Jack Wittman. Visitation will be held Friday, July 16, 2021, from 11:00 a.m. until the time of service at 1:00 p.m. in the chapel at Elias, Kallal and Schaaf Funeral Home in Alton, IL. Burial will take place at St. Charles Memorial Gardens Cemetery in St. Charles, MO. Lenora’s family would like to express their sincere gratitude and appreciation to the staff at Windsor Estates for their compassion and excellent care they provided her over the last 8 years. In lieu of flowers, memorial contributions may be made to the American Heart Association. Online condolences and guest book may be found at www.eliaskallalandschaaf.com

The family of Lenora F Mitchell created this Life Tributes page to make it easy to share your memories.

Send flowers to the Mitchell family.