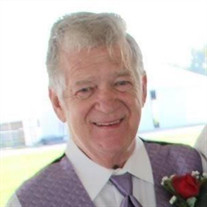 Dateline: Edwardsville, IL Larry G. Davis Sr., 69, of Edwardsville IL passed away on Saturday, May 14, 2022, at 1:52 am at Barnes Jewish Hospital. He was born on March 16, 1953, in Alton, IL the son of Richard Dale and Vella (Ruble) Davis. Larry married Nancy Cato in Godfrey, IL. She passed in 2006. Larry worked for Hussmann Refrigeration for many years. He enjoyed the simple things in life, being outdoors, going for “drives”, and spending time with his family. He is survived by his son, Larry Dale Davis (Lori) of Alton, IL, Tom Davis (Krissy) of Bethalto, IL, and Larry Davis Jr. (Brittney) of Bethalto, IL; a brother, Randy Davis (Renee); a sister, Lavonda Barbuxen (Ron); a sister-in-law, Betty Davis; five grandchildren; two great grandchildren; and several nieces and nephews. Along with his loving wife Nancy, Larry was preceded in death by his parents; two brothers, Jerry and Gary Davis; and a sister-in-law, Barbara Davis. Cremation rites will be accorded by Elias Kallal and Schaaf Funeral Home in Bethalto, IL. Memorial can be made to the family to help with expenses.

The family of Larry G. Davis Sr. created this Life Tributes page to make it easy to share your memories.

Send flowers to the Davis family.