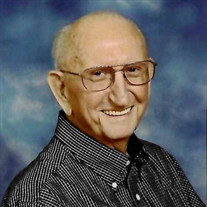 Dateline: Hardin Larry D. Angel, 81, passed away at 11:18 am on Saturday, February 20, 2021 at home with his family by his side after a 2-year battle with cancer. He was born October 5, 1939 in Kampsville, IL, the son of Erma Angel. He married his high school sweetheart, Jeanette L. Bizaillion, on November 24, 1960. They were married 51 years before she preceded him in death on December 28, 2011. Larry retired September 30, 1999 from Boeing (Mcdonell Douglas) after 39 and a half years of service. He was a member of the International Association of Machinists and Aerospace Workers Lodge 837 for 60 years. He was in the first class of volunteer EMT’s in Calhoun County and served 16 years. He was a member of St. Norbert’s Catholic Church, St. Francis of Assisi parish. Larry was very musically inclined from a young age and played guitar by ear. He was a member of Calhoun Vintage band. His most cherished role, throughout his life, was being a husband, dad, grandpa, and paw paw. He is survived by three daughters, Cindy (Doug) Heimer of Jerseyville, Tammy (Brian) Hill of Carrolton, and Kim (David) Mize of Bunker Hill; four grandchildren, Justin (Stephanie) Hill of Carrolton, Dustin (Jenny) Heimer of Kane, Alexandra (friend Cody) Mize of Wood River, and Connor (Michelle) Mize of Richmond; four great-grandchildren, McKenzie and Hunter Hill, Will and Wyatt Heimer; sister-in-law Mary Bizaillion of Quincy; nephews Greg, Richard, and Jack; nieces Sherry and Patricia; many cousins, especially Don Price Sr. and many friends. He was preceded in death by a brother-in-law, Dean Bizaillion and nieces Pamela and Sandy. Memorials may be made to St. Norbert’s School, St. Norbert’s Church, or Family Choice. You bid no one a last farewell You said goodbye to none Your loving heart just ceased to beat Before we knew you were gone God knew you were suffering And the hills were hard to climb So he closed your weary eyes And said “Peace be Thine”

The family of Larry D. Angel created this Life Tributes page to make it easy to share your memories.

Send flowers to the Angel family.