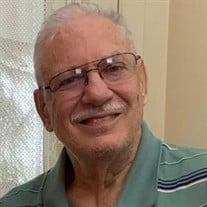 Dateline: Holiday Shores, IL Larioux “Butch” LaRue, 74, of Holiday Shores, IL passed away on Thursday March 24, 2022, at 3:57 am at Edwardsville Care Center. He was born on September 19, 1947, in Pierceton, IN, the son of Norman and LaVerne (Mills) LaRue. On June 15, 1978, Butch married Lorna Anderson at the 1st Christian Church in Bethalto, IL. Butch graduated from North Side High School in Ft. Wayne, IN in 1965. He then attended the G.E. Tool and Die Apprenticeship in Ft. Wayne, IN, and spent 10 years in their employ. The bulk of his professional career was spent at Emerson Electric in St. Louis. He found great fulfillment as a Manufacturing Engineer. Butch also enjoyed handy work including carpentry, playing the piano and organ, collecting kaleidoscopes, traveling, sitting out in the back yard looking at the flowers and birds, and spending time with family, especially his daughter Patti and her family. He is survived by his wife, Lorna LaRue; children, Pamela Meyers of Boston, MA, Patti (Ron) Clover of St. Louis, and Penny Jeffcott of St. Louis; brothers and their spouses, Steve (Ellen) LaRue of Columbia City, IN, Verne (Jennifer) LaRue of Colombia City, IN, and Mike (Janet) LaRue of Edinburg, TX; sister-in-law, Pam LaRue of Colombia City, IN; sister-in-law and her spouse, Beth (Ken) Drewenski of Rochester, IL; grandchildren, Mellisa (Scott) Kennedy of St. Louis, Leanna Clover of St. Louis, Laura Clover of Florida, Active Duty Navy PO2 Nickolas Clover of Baltimore, and Ella Clover of St. Louis; great-grandson Samuel Kennedy; nephew Todd Drewenski; niece Kara Drewenski; and numerous other grandchildren, great-grandchildren, nieces, and nephews. Butch was preceded in death by his parents, Norman and LaVerne LaRue; and brother Lynn LaRue. A visitation will be held on Tuesday March 29, 2022, from 4:00 pm until time of service at 6:00 pm at the Elias, Kallal and Schaaf Funeral Home in Bethalto. Per his wishes cremation rites will follow. Elias, Kallal and Schaaf Funeral Home in Bethalto is entrusted with the cremation rites. Memorials may be made to the American Transplant Foundation, as Butch was a kidney transplant recipient.

The family of Larioux "Butch" LaRue created this Life Tributes page to make it easy to share your memories.

Send flowers to the LaRue family.