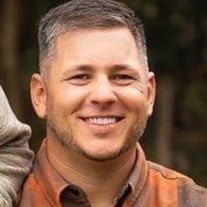 Dateline: Dorsey, IL Kyle Lee Watson, 34, of Dorsey, IL passed away on Saturday, February 26, 2022, at 11:30 pm at his home. He was born on February 11, 1988, in Maryville, IL the son of Barry and Kelly (Lee) Watson. On October 9, 2010, Kyle and Hailee Hart were married by Kyle’s best friend, Justin Hemmer in Glen Carbon, IL. Kyle worked for Brewster and Armstrong Construction Company and was a member of the Local 520 Operating Engineers Union. Family meant everything to Kyle, and he loved spending time with his children. He loved being outside fishing and having BBQs, his job, roping and horse back riding, and working with his dog, Fiona. He was a wonderful and one-of-a-kind husband who always had a smile on his face and gave the best hugs. He is survived by his wife, Hailee Watson of Dorsey, IL; children, Griffen and Lea Watson; sisters, Ashley Watson of Worden, IL and Sarah Winston (Luke) of Belleville, IL; grandmother, Donna Watson of Capron, IL; a nephew, Nolan Watson; mother and father-in-law, Kelly and Ross Kirkpatrick of Worden, IL; a sister-in-law, Heather Campbell (Dallas Sherman) of Shipman, IL; a brother-in-law, Tucker Kirkpatrick of Worden, IL; and several aunts, uncles, cousin and friends. Kyle was preceded in death by his parents; paternal grandparents, Harold and Sharon Watson; and maternal grandparents, Don and Ann Lee. Per his wishes cremation rites will be accorded. Elias Kallal and Schaaf Funeral Home in Bethalto is entrusted with the cremation rites. A Visitation will be held on Saturday, March 5, 2022, from 1:00 pm until the Celebration of Life at 3:00 pm at The New Bethel United Methodist Church in Glen Carbon; 131 North Main, Glen Carbon, IL 62034. Memorial may be made towards an education fund for his children Griffen and Lea, please make checks payable to Hailee Watson.

The family of Kyle Lee Watson created this Life Tributes page to make it easy to share your memories.

Send flowers to the Watson family.