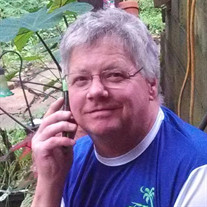 Kent R. Flanagan, 61, passed away at 8:59 pm on Thursday, February 3, 2022 at Alton Memorial Hospital. He was born on August 4, 1960 in Alton, the son of the late Carl Raymond and Phyllis (Dugger) Flanagan. Kent married Debra "Debbie" Roberts on June 1, 1977 in Edwardsville and she preceded him in death on March 20, 2019. Kent loved spending time with his grandkids and loved flowers and his fish pond. He is survived by his two daughters, Amanda E. (Bruce) Farris of Godfrey and Elizabeth (Andrew) Creasy of Highland; and a son, Matthew (Tracy) Flanagan of Greenfield; seven grandchildren, Caleb and Kegan Farris, Elijah and Lillian Creasy, Madalyn, Alexis and Ellyanna Flanagan; three brothers, Kevin, Craig and Patrick Flanagan. In addition to his wife and parents, he was also preceded in death by a brother, Keith Flanagan. Visitation will be from 2:00 pm until time of Funeral Services at 5:00 pm Sunday, February 6, 2022, at Elias, Kallal & Schaaf Funeral Home in Godfrey with Pastor Erik Scottberg, officiating. Cremation will follow at Elias, Kallal & Schaaf Crematory. Memorials are suggested to the Multiple Sclerosis. Online condolences and guest book may be found at www.eliaskallalandschaaf.com.

The family of Kent R. Flanagan created this Life Tributes page to make it easy to share your memories.

Send flowers to the Flanagan family.