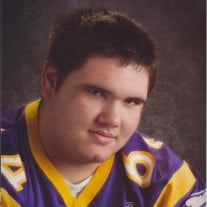 Dateline: Brighton Kenneth “Kenny” J. Torrez, 31 of Brighton, IL passed away on Saturday March 12, 2022, in Brighton, IL. He was born on August 24, 1990, in St. Louis, MO, the son of John J. Torrez and Melody J. (Moore) Leisner. Kenny was an operator for C&C construction. He was a 3rd degree member of the Alton Knights of Columbus and a member at St. Alphonsus Catholic Church in Brighton. Kenny enjoyed riding his motorcycle, football, forging and making knives, brewing his own beer, and spending time with all his family and friends. He is survived by his father, John Torrez of Brighton; mother and stepfather Melody and Michael Leisner of Wood River; siblings and their spouses Kara and Jimmie Pollard of Bunker Hill, Kaitlyn Torrez and fiancé Scott Forbes of Wood River, and Kelli and Christopher Friedel of Bethalto; step siblings Heather Leisner and Josh Leisner; nieces and nephews Riley, Logan and Brooklyn and Parker; paternal grandmother Sally Davenport of Wood River; uncle Kevin Horton of Marrinette, WI; several cousins; and his canine companion Lobo. Kenny was preceded in death by his paternal grandfathers John Torrez and Gary Davenport; maternal grandparents Kenneth and Virginia Moore; uncles Mark Torrez and Jack Moore; and aunts Annette Horton, Gloria Steinkuehler, and Donna Washington. Visitation will be held on Thursday March 17, 2022, from 4:00 to 7:00 pm at Elias, Kallal and Schaaf Funeral Home in Bethalto. Mass of Christian Burial will be held on Friday March 18, 2022 at 11:30 am at Our Lady Queen of Peace in Bethalto with Father Tom Liebler officiating. Burial will follow at St. Joseph’s Cemetery in Alton, IL. Memorials can be made to Kara Pollard for an education fund for Kenny’s nieces and nephew or the Endangered Wolf Center in Eureka, MO. Online condolences and guest book may be found at www.eliaskallalandschaaf.com

The family of Kenneth "Kenny" Torrez created this Life Tributes page to make it easy to share your memories.

Send flowers to the Torrez family.