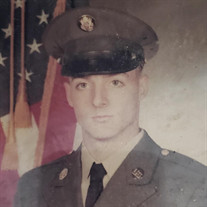 Date Line: Edwardsville John B. Leonard, 67, of Edwardsville, passed away on Tuesday, November 16, 2021, at Anderson Hospital in Maryville. He was born in St. Louis, on February 17, 1954, the son of Buford E. Leonard and Vivian E. (Hicks) LeBlanc. He married Linda D. Dyar on December 7, 1971, at Ft. Campbell, KY. John is a Veteran of the United States Army where he was in the 82nd and 101st Airborn. He retired as an E6 after 20 years of service, from the Army in 1990. He enjoyed collecting coins, collecting guns and building his own, reading, fishing, and spending time with his family and friends, especially his grandchildren. He is survived by his children, Roslyn (Jamie) Rushton of Hartford, Shelly (Tim) Stahlhut of Jerseyville, and John Leonard II (fiancé Jennifer Miller) of Union, MO; grandchildren, Jacqui (Hudson) Nilhas, Lynzi Stahlhut, Dalton Stahlhut, Rebecca Leonard, Isabellah Leonard, Dylan Leonard, Trey Leonard, Tristan Leonard, and Alexis Leonard; great-grandchildren, Una Faye, Hunter, Orion, and Zoey; sisters, Debbie (Robert) Brown of TX, Carol LeBlanc of TX, and Anita Wallace of CA; a brother-in-law, Keith Dyar of WI; and several nieces, nephews, cousins and friends. Along with his parents, Buford and Vivian, he was preceded in death by his step-father, Dennis LeBlanc; step-mother, Renie Leonard; and a nephew, Tristan Judkins. Per his wishes, cremation rites will be accorded. A memorial visitation will be held on Tuesday, November 23, 2021, from 10:30 am until time of service at 12:30 pm, at Elias, Kallal and Schaaf Funeral Home in Bethalto. Graveside burial will follow at Jefferson Barracks National Cemetery at 2:30 pm. Memorials may be made to the Disabled Veterans Foundation. Online condolences and guest book may be found at www.eliaskallalandschaaf.com

Date Line: Edwardsville John B. Leonard, 67, of Edwardsville, passed away on Tuesday, November 16, 2021, at Anderson Hospital in Maryville. He was born in St. Louis, on February 17, 1954, the son of Buford E. Leonard and Vivian E. (Hicks)... View Obituary & Service Information

The family of John B. Leonard created this Life Tributes page to make it easy to share your memories.

Send flowers to the Leonard family.