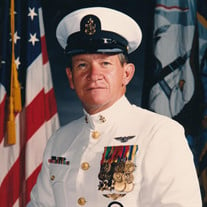 John Gilbert Hultz Jr, 75, of Godfrey, Illinois, died December 11th 2020, at Alton Memorial Hospital. John was born January 25, 1945, in Collinsville, Illinois, to John and Stella (Riggs) Hultz. He graduated from Collinsville High School in 1964. Shortly after graduating high school John joined the U.S. Navy, where he served for 22 years and retired as a Senior Chief. During his military career he had many accomplishments to his credit. One of John’s most notable was during one of his three tours in Vietnam where he served as a search and rescue swimmer he was accredited with several rescues and received national accolades for this. He enjoyed coin collecting, hunting for arrowheads and traveling. In his retirement years he owned and operated a furniture upholstery shop in downtown Alton, IL. John also enjoyed volunteer work at the local soup kitchen. He is survived by his wife Marla Hultz of Godfrey, IL; a sister Grace Schiber of Maryville, IL and brother Robert Hultz of Saint Jacob, IL; his children and spouses Sean and Stephannie Hultz of Golden Eagle, IL; Jay and Caroline Hultz of St. Peters, MO, Tanya and Gill Munoz of Escondido CA, and Ellen and Justin Stein of Ballwin, MO and his grandchildren Jack, William, Vivian, Emma, Killian, Claire, Kate, Callie and Landon. He was preceded in death by his father and mother, John and Stella Hultz and sisters Sandy Bendrum and Vicki Sweitzer. A service is with full Military Honors will be held in the near future at Jefferson Barracks but due to COVID- 19 restrictions guests will be limited. Current arrangements are with Elias, Kallal and Schaaf Funeral Home.

The family of John Gilbert Hultz Jr created this Life Tributes page to make it easy to share your memories.

Send flowers to the Hultz family.