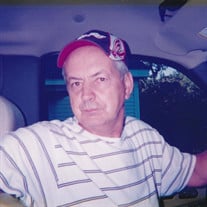 Dateline: Alton John C. Hansen, 73, passed away at 7:10 PM, Sunday, July 25, 2021, at his home. He was born on January 25, 1948, in Madison, Wisconsin, the son of Robert W. and Charlotte M. (Robinson) Hansen. John shared his life with Donna Narup. They celebrated 46 years together this month. John made a living working in HVAC, but his passion was welding. He built the Centennial Man statue, that resides in East Alton, in his basement. John was an honorary member of the Alton Motor Boat Club as well as a slip holder at The Alton Marina. When he wasn’t boating, and hanging out with his friends, he liked to cruise around in his Hummer. John was a well-liked guy, and especially known for his great sense of humor. In addition to his wife, Donna, he is survived by two sisters, Charleen Schaaf of Meadowbrook and Mary Frances (David) White of Cahokia; a mother-in-law, Jean Narup of Alton; a sister-in-law Debbie (Charlie) Dublo of Alton; a brother-in-law, Jeff (Jan) Narup of Holiday Shores, as well as many nieces, nephews, extended family members and good friends. John is preceded in death by his parents, a son, John W. Hansen, and a brother-in-law, Wayne Schaaf. In celebration of his life, visitation will be held 9:30 AM – 10:30 AM, Tuesday, August 3, 2021, at Elias, Kallal and Schaaf Funeral Home in Godfrey. A Mass of Christian Burial will be held 11 AM, Tuesday, August 3, 2021, at St. Ambrose Catholic Church. Father Steve Janoski and Deacon Bill Kessler will officiate. Burial will follow at St. Joseph’s Cemetery in Alton. Memorials are suggested to Five A's Humane Society in Alton, or The Michael J. Fox Foundation for Parkinson’s Research (michaeljfox.org). https://www.michaeljfox.org/donate

The family of John C Hansen created this Life Tributes page to make it easy to share your memories.

Send flowers to the Hansen family.