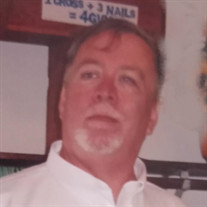 John Francis Frogge, 58, passed away at 4:30am, Wednesday, March 10, 2021, at Riverside Rehab & Healthcare in Alton. He was born August 16, 1962, in Memphis, TN., the son of Glenn Correll and Alice Ruth (Francis) Frogge. He married Tanya M. Elsworth on December 9, 2017 at Southern Baptist Church in Alton, IL. She survives. John was involved with the Lion’s Club and a member of the National Federation of the Blind. He was passionate about IMPACT and advocated for their involvement to support individuals with disabilities within our community. In addition to his wife, he is survived by three children, Amanda (Auntrice) Johnson of Godfrey, Samantha (Tyler) Koski of North Carolina and Joshua Clements of Alton; a grandson, Sean Johnson; a brother Jerry Frogge of Tennessee; a sister, Joanne Merrill of Tennesse; a nephew, Michael Frogge; nieces, Stephanie Frogge and Adrienne Merrill and a great-niece, Alayna Merrill. He was preceded in death by his parents. Due to the COVID-19 pandemic, social distancing, occupancy, and mask wearing guidelines will be followed as mandated by the CDC. Per the family’s request, cremation rites will be accorded. Visitation will be from 2pm until time of memorial service at 3pm on Sunday, March 14, 2021 at Elias, Kallal and Schaaf Funeral Home in Godfrey. Pastor Cletus Gribble will officiate. Memorials may be made to National Federation of the Blind or to Elias, Kallal and Schaaf Funeral Home to assist with expenses.

The family of John Francis Frogge created this Life Tributes page to make it easy to share your memories.

Send flowers to the Frogge family.