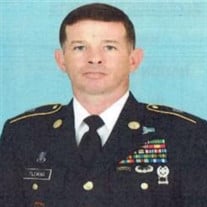 John Patrick Fleming, 44, of Pace, Florida passed away on Friday January 14, 2022, at home due to cardiovascular disease. He was born on January 13, 1978, in Alton, IL, the son of Patrick and Elizabeth Anne (Funk) Fleming. On December 5, 2003, John married Helen Street in Edwardsville, IL, with a public ceremony following on May 30, 2004, in Godfrey, IL. John graduated from Marquette High School and entered the U.S. Army in 1999. He completed 20 years of continuous, honorable service with the 101st Airborne and Ranger Training Battalions, where he achieved the rank of Sargent First Class. John is a veteran of The Global War on Terrorism including Operation Enduring Freedom and Operation Iraqi Freedom where he earned several decorations/awards Including the Silver Star for gallantry in action against an enemy in Operation Bulldog Bite. John was actively involved with several local organizations, clubs, and governing boards, including Escambia River Gun Club. He enjoyed spending time outdoors, shooting, and above all, spending time with his family, including coaching his son on sports. In addition to his devoted wife, Helen, John is survived by a loving son, John Patrick Jr. of Pace, FL; his father, Patrick (Rosemary) Fleming of Alton, IL; a brother, Michael (April) Fleming of Spokane, WA; a sister, Anne Fleming of Sarasota, FL, parents- in-law, William and Charlene Street, and a brother-in-law, Bill (Marissa) Street, along with many aunts, uncles, nieces, nephews, a large crew of cousins and good friends. John was preceded in death by his mother, Beth Fleming, grandparents, Don and Judy Funk and Thomas and Marion Fleming, and a uncle, Donald Funk. Visitation will be held 2 PM – 6 PM, Sunday, January 23, 2022, at Elias, Kallal and Schaaf Funeral Home in Godfrey, IL. A Funeral Service is scheduled for 10 AM, on Monday, January 24, 2022, at Elias, Kallal and Schaaf Funeral Home in Godfrey, IL. Pastor Zack Funk will officiate. Burial will follow at St. Patrick’s Cemetery in Godfrey, IL with Military Honors provided by Alton VFW Post 1308. Active military will present the flag. In lieu of flowers, memorials are suggested to the John Patrick Fleming Jr. Scholarship Fund.

John Patrick Fleming, 44, of Pace, Florida passed away on Friday January 14, 2022, at home due to cardiovascular disease. He was born on January 13, 1978, in Alton, IL, the son of Patrick and Elizabeth Anne (Funk) Fleming. On December 5,... View Obituary & Service Information

The family of John Patrick Fleming created this Life Tributes page to make it easy to share your memories.

John Patrick Fleming, 44, of Pace, Florida passed away on Friday...

Send flowers to the Fleming family.