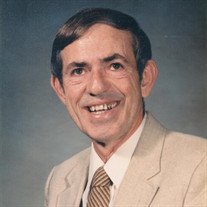 Dateline: Bloomington, IL John Henry Barth, 86, of Bloomington, passed away on Monday, July 19, 2021, at Alton Memorial Rehab. He was born on September 11, 1934, in Seminary Township, IL, the son of Melvin and Sylvia (Stone) Barth. John married the love of his life, Charlene Kay Ambrose on June 5, 1965, in Bethalto at Our Lady Queen of Peace. They had just celebrated 56 years of marriage before his passing. John retired from Bloomington Vocational High School where he taught data processing. He enjoyed dancing every weekend in Bloomington and traveling to new places with his wife, Charlene. He also enjoyed hunting for rabbits, squirrels, and mushrooms. He was a member of the Moose Club. And a life-long student, always furthering his education. He served his country in the United States Army and the Army Reserves from November 1956 until November 1962. Along with his wife, Charlene, he is survived by three sisters, Macil Friedman, Donna Worsham, and Brenda Rust; sisters-in-law, Patricia (Juan) Woods and Vicki Ambrose; a brother-in-law, William (Abby) Ambrose; and many loving nieces and nephews. He was preceded in death by his parents; mother-in-law, Mary Jane Mayberry; and four brothers-in-law, Harry Friedman, Gary Worsham, Charles Rust, and Gary Ambrose. Per his wishes, cremation rites will be accorded. A graveside service will be held at Rose Lawn Memory Gardens on Friday, July 30, 2021 at 11:00 am, with Father Tom Liebler as celebrant. Elias, Kallal and Schaaf Funeral Home in Bethalto is in charge of arrangements. Memorials can be made to The Alzheimer’s Association. Online condolences and guest book may be found at www.eliaskallalandschaaf.com

The family of John Henry Barth created this Life Tributes page to make it easy to share your memories.

Send flowers to the Barth family.