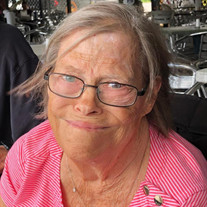 Dateline: Wilson, WY Joan Lammers, 75 of Wilson, WY; formerly from Alton, IL passed away on Wednesday, December 2, 2020 at 3:55 pm surrounded by her family. She was born on January 2, 1945 in Chicago, Il, the daughter of Edward and JoAnn (Wilder) Emery. She married George Lammers; he survives. Joan spent summers in Lake Geneva, Wisconsin while growing up. She was a graduate of the Latin School of Chicago in 1963. She attended college at the University of Wisconsin and Monticello College in Godfrey, Illinois where she met her husband George Lammers. Joan was a homemaker while her husband was a civil engineer. Joan was an active member of the Main Street United Methodist Church during their years spent in Alton, IL before she and her husband retired to their summer home in Wilson, WY. Joan and George enjoyed spending their winters in sunny Key Largo, FL at the Ocean Reef Club. Her interests included family, needle point, bridge club, and reading. Joan was thankful for the wonderful in-home care she received from the staff of Teton Home Care Plus during the last stage of her life. Joan is survived by her loving husband, George Lammers of Wilson, WY; three children, Lisa Crispi (Jon) of Oswego, IL and their two children, Hannah and Mitchell; Katie Cox (Brian) of Johnston, IA and their two children, Carsen and Carrigan; and Molly Elliott (Brian) of Glen Carbon, IL and their three children, Jackson, Samantha, and Harper; her sister, Lucy Otzen (Karl), and brother, William Emery (Bonnie). She was preceded in death by her parents and older brother (Edward Emery). A Private family visitation will be held, on Wednesday December 9, 2020, with a private graveside service to follow at Upper Alton Cemetery. The family requests that in lieu of flowers, memorials be made to: St. John’s Health Foundation - Sage Living In memory of Joan Lammers (link: https://stjohnsfoundation.health/ways-to-give/#donate-form) Or Make check out to St. John’s Health Foundation Note on check: Sage Living, In Memory of Joan Lammers Mail to: St. John’s Health Foundation Attention: Katie Long PO Box 48 Jackson, WY 83001 An online condolence and guest book may be found at www.eliaskallalandschaaf.com. Or condolences may be sent to P.O. Box 1122, Wilson, WY 83014

Dateline: Wilson, WY Joan Lammers, 75 of Wilson, WY; formerly from Alton, IL passed away on Wednesday, December 2, 2020 at 3:55 pm surrounded by her family. She was born on January 2, 1945 in Chicago, Il, the daughter of Edward and JoAnn (Wilder)... View Obituary & Service Information

The family of Joan Lammers created this Life Tributes page to make it easy to share your memories.

Send flowers to the Lammers family.