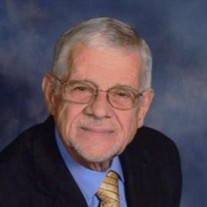 Dateline: Alton, Illinois Jim DeMunbrun, 77, passed away at 7:00 pm on Thursday, April 21, 2022 at home with family by his side. He was born on April 1, 1945 in Carlinville, IL to Jim and Irma (Goode) DeMunbrun. He married Andrea Elliott on July 7, 1985 in Godfrey, IL. She survives. Jim was a member of Faith Lutheran Church in Godfrey where he served as an Elder and gave his time wherever needed. Jim worked as a machinist at Owens-Illinois Glass until retirement in 2007. He enjoyed spending time outdoors and had fond memories of his trout fishing days at Bennett Springs. Once retired, he spent his days tinkering in the garage and “fixing things.” He was an avid St. Louis Blues Fan, but above all, his greatest joy was his family. In addition to his wife, Andrea, Jim is survived by three sons, Bradley (Rebecca) DeMunbrun of Crystal City, MO, Timothe (Katie) DeMunbrun of Godfrey, IL and Joel DeMunbrun of Godfrey, IL; a daughter, Jennifer (Andrew) Ashley of Nixa, MO; six grandchildren, Ethan DeMunbrun, Andrew Ashley, Zachariah Ashley, Jane DeMunbrun, Lily DeMunbrun and Carly DeMunbrun; two sisters, Jeanette (Roger) Becker of Chicago, IL and Mary Henesey of Alton, IL as well as many nieces, nephews, extended family members and good friends, to whom he was known as Joe. He was preceded in death by his parents. Visitation will be Wednesday, April 27 from 9:00-11:00am at Faith Lutheran Church in Godfrey, IL followed by a funeral service at 11:00 am. Reverend Dr. David Schultz will officiate. Burial will follow at Valhalla Memorial Park in Godfrey. In lieu of flowers, memorials are suggested to Faith Lutheran Church in Godfrey attn: Capital Improvement Fund.

Dateline: Alton, Illinois Jim DeMunbrun, 77, passed away at 7:00 pm on Thursday, April 21, 2022 at home with family by his side. He was born on April 1, 1945 in Carlinville, IL to Jim and Irma (Goode) DeMunbrun. He married Andrea Elliott... View Obituary & Service Information

The family of Jim DeMunbrun created this Life Tributes page to make it easy to share your memories.

Send flowers to the DeMunbrun family.