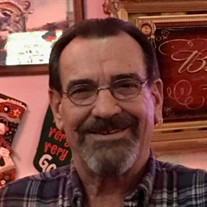 Jesse A. Eaton, age 68, passed away at 12:30 a.m. on Saturday, December 11, 2021 at home from pancreatic cancer. He was born on June 4, 1953 in Flora, Illinois, the son of the late Clifford E. & Ola N. (Lents) Eaton. He was married to the late Jacqueline L. (Ferguson) of Bethalto from 1973 - 1978. Together they had one daughter, Andrea Brown (Eaton). Jesse was a CMHS graduate, class of 1971. He was employed at Ecolab for 25 years as an Account Manager. He was a member of the American Legion in Bethalto and a parishioner of St. Michael’s in Staunton. He loved people and never met a stranger. He enjoyed singing karaoke, listening to music and was a drummer in his early years. He was the life of any party or event. His furry companion Tilly was always at his side. He is survived by his daughter and her spouse; Andrea & Justin Brown of Bethalto, four grandchildren; Jacqueline Zangori, Zaccheri Zangori, Jerra (Nick) Vogel, and William Brown, two great-grandchildren; Bennett and Harper Vogel and lifelong friend; Bill Williams. He is also survived by three sisters Sue Bruce of Bethalto, Mary Ellen Smith of Holiday Shores, and Shirley Dunnagan of Bunker Hill; two sister-in-laws, Jacqualin Eaton of Bethalto and Sandra Eaton of Dexter, Michigan; one brother-in-law, Bill Odom of Meadowbrook, and several nieces, nephews, cousins and friends. He is preceded in death by his wife; his parents; three brothers, James “Jimmy”, Donald “Donnie”, and Gary Eaton; four sisters, Jean Engelmeyer, Joyce Bennett, Sandy Young and Barbara Odom; and five brother-in-laws, Harvey Engelmeyer, Loris Bennett, Joe Young, Dale Bruce and Danny Dunnegan. Visitation will be at Elias, Kallal & Schaaf Funeral Home in Bethalto from 4:00 p.m. to 7:00 p.m. on Tuesday, December 14. Funeral mass will be held at St. Michael the Archangel Catholic Church in Staunton, Illinois at 10:30 a.m. on Wednesday, December 15, Father Larry Anschutz officiating. Burial will follow at Red Brush Cemetery in Louisville, Illinois. Memorials may be made to the American Cancer Society and/or St. Michael the Archangel Catholic Church in Staunton, IL. The family would like to deeply thank Father Larry Anschutz, The Byerly Family and Heartland Hospice for the loving care they gave to Jesse during his final days.

The family of Jesse A. Eaton created this Life Tributes page to make it easy to share your memories.

Send flowers to the Eaton family.