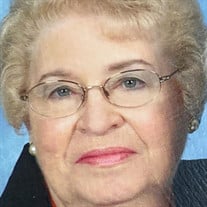 Dateline: Bethalto Jeanette Waltz, 93, of Bethalto, passed away on Wednesday, February 2, 2022, at 7:15 pm, at the Villas of Hollybrook. She was born on April 16, 1928, in Eldorado, IL, the daughter of Leslie and Annie (Hammersley) Downey. She married James “Jim” Waltz on July 13, 1946. He preceded her in death. Jeanette graduated from Kitzmiller Beauty College and went on to own and operate Bethalto Beauty Haven with her sister, Vernita. She enjoyed her craft and her clients. After retiring as a hairdresser, she pursued her real estate license and sold real estate for Major Real Estate for several years. Jeanette was a long-time member of First Baptist Church of Bethalto and a former member of Berean Baptist of Bunker Hill. She was an avid bowler in her younger days. Throughout her life, she spent many hours crocheting beautiful afghans for loved ones. She and her husband delivered Meals on Wheels and were active in Bunker Hill Seniors Group. Most importantly she taught those around her the true meaning of love. Survivors include her three children, Gwen (David) Smith of Edwardsville, Kevin (Mona) Waltz of Godfrey, and Kellye (Michael) Harkey of Bethalto; a sister, Genevieve Farris of Indianapolis, IN; twelve grandchildren, Ryan Waltz, Corey Waltz, Jacob Waltz, Aliska Hammon, Shawn Hammon, Lauren Smith, Kayce Waltz, Emma Moore, Turner Marquis, Drew Marquis, Michael Harkey, Joshua Harkey, and Kelley Sherwood; several great-grandchildren; and a large extended family. Along with her parents and husband, Jim, she was preceded in death by a son, Ron Waltz and his wife, Nancy; two sisters, Vernita Lasseter and Vernell Smith; three brothers, Emil Downey, Edward Downey, and Carol Downey; and a granddaughter, Natalie Hammon. Visitation will be on Thursday, February 10, 2022, from 11am until time of service at 1pm, at Elias, Kallal and Schaaf Funeral Home in Bethalto. Burial will follow at Rose Lawn Memory Gardens. Memorials can be made to First Baptist Church of Bethalto and/or The Alzheimers Association. Online condolences and guest book may be found at www.eliaskallalandschaaf.com

Dateline: Bethalto Jeanette Waltz, 93, of Bethalto, passed away on Wednesday, February 2, 2022, at 7:15 pm, at the Villas of Hollybrook. She was born on April 16, 1928, in Eldorado, IL, the daughter of Leslie and Annie (Hammersley) Downey. She... View Obituary & Service Information

The family of Jeanette Waltz created this Life Tributes page to make it easy to share your memories.

Send flowers to the Waltz family.