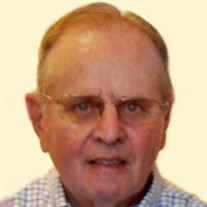 Mr. Jan C. Harmon, 83, of Overland Park, KS, formerly of Bethalto, passed away on Thursday, May 12, 2022, at Brookdale Assisted Living in Overland Park. He was born in Kane, IL, in November of 1938, the son of William and Agnes (Flamm) Harmon. Jan married Karen S. Neumann on March 6, 1964. She preceded him in death May 2, 2018. Jan enjoyed his entire career as a telephone man. And he enjoyed his retirement traveling in the RV (especially to Arizona), fishing, boating, shooting sports, four-wheeling in the desert, hitting the dance floor, and having fun with his love, Karen even more. He loved to read and learn and, also, spent countless hours watching shows that taught a bit of something. Jan was a great craftsman and handyman and built many treasured projects for his daughters. He took joy in teaching his daughters and grandson to do things for themselves like crafting a fancy fireplace mantle, building a television cabinet, repairing the car, building a patio, replacing the hot water heater, changing a tire before you could drive on your own (Ha! Actually, rotating all four tires!), installing a ceiling fan, and so many other things…. All lessons that made them stronger. He loved his family and friends and having fun with them. And his amazing care team can attest to his sense of humor. Jan is an Army Reserve Veteran and was a member of Zion Lutheran Church in Bethalto. Survivors include daughters, Jennifer Harder (Paul Tremewan) of Overland Park, KS and Jana Harmon (Alan Gerberding) of O’Fallon, MO, a grandson, Wolfgang Gerberding, and nephews, nieces, brothers-in-law and close friends. Along with his wife, Karen, his parents, and in-laws (George and Sarah Neumann), he was preceded in death by two sisters, Joyce Berry, and Judith Marshall. A funeral service will be held on Monday, May 23, 2022, at 12 pm, at Elias, Kallal and Schaaf Funeral Home in Bethalto with Vicar Jared Fenske as officiant. Burial and graveside service will follow at Rose Lawn Memory Gardens in Bethalto. Memorials can be made to Michael J. Fox Foundation for Parkinson's Research, American Cancer Society and/or Kitty City Kansas Rescue. An online condolence and guest book may be found at www.eliaskallalandschaaf.com.

Mr. Jan C. Harmon, 83, of Overland Park, KS, formerly of Bethalto, passed away on Thursday, May 12, 2022, at Brookdale Assisted Living in Overland Park. He was born in Kane, IL, in November of 1938, the son of William and Agnes (Flamm) Harmon.... View Obituary & Service Information

The family of Jan C. Harmon created this Life Tributes page to make it easy to share your memories.

Send flowers to the Harmon family.