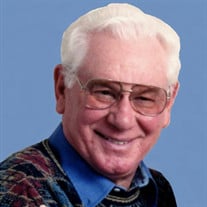 Date Line: Bremerton, WA James E. Greer, Sr., 90, of Cottage Hills, IL, passed away on Sunday, June 13, 2021 at his son’s home in Bremerton, WA. He was born in Lagote, IN, on August 25, 1930 the son of Chester J. and Rose (Brackman) Greer. He married Helen D.J. Price on July 14, 1956 in Marine, IL. She survives. Jim “Red” was an over-head crane operator for 44 years at Laclede Steel in Alton, IL until his retirement in May of 1992. He was a member of the House of Victory Church in Cottage Hills, IL. Jim enjoyed camping with friends, hauling with his dump truck, old cars, riding his Harley when younger, and spending time with his friends and family. Along with his wife, Jeanne, he is survived by his sons, Frank McCormick (Betty) of Beaumont, TX and Scott Greer (Lisa) of Bremerton, WA; a sister, Iola Voyles of Carlinville, IL; four grandchildren, Casey McCormick (Stephanie), Ryan McCormick (Sandra), Jessica Greer, and Justin Greer; and two great grandchildren, Baelyn and Alex. He was preceded in death by his parents and a son, James “Jimmy” E. Greer, Jr., and two brothers, Bill and Arthur Greer. A visitation will be held on Wednesday, June 23, 2021 from 10:00 am until the time of service at 11:00 am at the Elias Kallal and Schaaf Funeral Home in Bethalto. Burial will follow at Rose Lawn Memory Gardens in Bethalto, IL In Lieu of flowers, memorials may be made to the House of Victory Church in Cottage Hills, IL.

The family of James E. Greer Sr. created this Life Tributes page to make it easy to share your memories.

Send flowers to the Greer family.