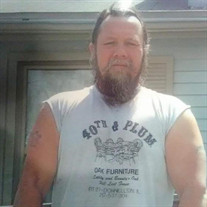 James Allen Cross, 62, passed away Saturday, May 21, 2022 at his home. He was born on January 13, 1960 in Alton, IL the son of Conrad “Corky” and Helen (Savage) Cross. James met his life partner and wife Melinda Andrus-Cross in 1980. They were together for 37 years until her death in 2017. James was a phenomenal flooring installer with over 30 years’ experience. He loved riding motorcycles, lifting weights, playing the drums, and watching the Dallas Cowboys. James was an avid writer and has filled many journals. He would always remind his children to “wash ur face comb ur hair brush teeth.” James is survived by his children and their spouses, James L. Cross, Holly and Josh Cross, Heather and Edward Cross-Winchester, Autumn and Nick Greenberg, and Zachary Cross, all of Alton; a sister, Dusty Springman of Carrollton; grandchildren, Ethan, Taylor, Colten, Brenden, Haylea, Zoei, Noah, and Layla; several aunts; and an uncle. Along with his wife, James was preceded in death by his parents; and brothers, Robert Ewing and Vance Ewing. Per his wishes, cremation rites will be accorded, and professional services will be handled by Elias, Kallal & Schaaf Funeral Homes. A Celebration of Life will be held at a later date.

The family of James Allen Cross created this Life Tributes page to make it easy to share your memories.

Send flowers to the Cross family.