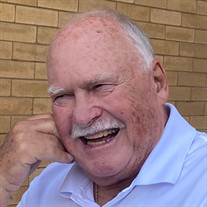 Dr. James Foster Brown, 80, passed away on Saturday, January 16, 2021 in Naples, Florida. He was born on May 19, 1940 in Fairmont, Virginia. He was the son of Ladee and Hazel Brown. He married Valerie Jean Scott on June 16, 1962 at St. Patrick’s Church in Alton. She passed away in 2002. He married Ramona Jean Lombardi, after becoming engaged in Gory, Ireland, on November 4, 2003. She survives. In addition to his wife, Ramona, he is survived by three sons and daughters-in-law, Scott and Cindy Brown of Troy, Il., Matthew and Michelle Brown of Fairview Heights, Il., Michael and Stephanie Brown of Godfrey, Il.; one daughter and son-in-law, Molly and Mark Elliott of Godfrey, Il.; two stepsons, Michael and Julie Lombardi and Craig and Amy Lombardi, both of Godfrey, Il.; 13 grandchildren, Adam and Carson Brown, Stephen and Meghan Elliott, Christian and Nicholas Brown, Peyton Brown, Sidney and Joshua Lombardi, and Colin, Jacob and Jack Lombardi; one brother, Jon Brown and one sister, Joyce Eberhardt. He was preceded in death by his parents, his wife, Valerie Jean Scott, and his grandson, Andrew Michael Elliott. He graduated from Alton High School in 1958, with honors. He attended Westminster College in Fulton, Missouri, in 1962; where he was a member of Sigma Chi Fraternity and Phi Rho Epsilon Fraternity, an honorary pre-med fraternity. He graduated from the University of Illinois Medical School in Chicago, where he was a member of Phi Kappa Alpha. He completed his internship at St. Luke’s Hospital in St. Louis, Missouri. He served in the US Navy, where he was a Chief Medical Officer (Lieutenant) on the USS Bushnell in Key West, Florida. He completed his residency at the University of Illinois Hospital in Chicago. He began practicing in Alton, Il. in 1972, when he joined Drs. Morrison, Allen, and Hardbeck. Morrison and Allen left in the 70s and he and Dr. Hardbeck practiced as partners for 23 years. He was Head of the OB-Gyn Department at Alton Memorial and St. Anthony’s Hospitals. He retired in 2001, after almost 30 years as an obstetrician/gynecologist in Alton. He delivered over 5,000 babies during his career. He was a member of Madison County Medical Society and the Rotary Club of Alton/Godfrey. He enjoyed golfing, reading, traveling the world, fishing, an immense love for cars, and being with family and friends. He touched many lives in our community. He will be remembered for his kind heart and laughter. Due to COVID-19 guidelines and restriction, a private family viewing will be held Friday January 22, 2021 from 4:00-7:00 at Elias, Kallal, and Schaaf Funeral Home in Godfrey. A Mass of Christian Burial will be held at 10:00 am Saturday January 23, 2021 at St. Mary’s Church in Alton, following COVID-19 guidelines and regulations. Father Jeremy Paulin, OMV Burial will follow in St. Patrick’s Cemetery in Godfrey. Alton VFW Post 1308 will perform Military Rites. Memorials made be made to one of the following: St. Mary’s Catholic Church in Alton, St. Agnes Church in Naples, Florida, or Craig Hospital in Denver, Colorado.

The family of Dr. James Foster Brown created this Life Tributes page to make it easy to share your memories.

Send flowers to the Brown family.