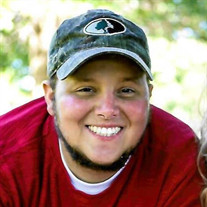 Dateline: Hardin Jacob Scott Botterbush of Hardin left his earthly home to go to heaven to hunt and fish for eternity. He passed away at his home on February 11, 2022 after a long battle from the side effects of Leukemia. Jacob was born on April 3, 1987 in Alton. He grew up in the Alton/Godrey area where he graduated from Alton High School in 2006. Jacob married Elizabeth Watters on October 16, 2010. They were blessed with a daughter, Libby. He is survived by his wife, Elizabeth and his daughter, Libby; his parents, Tim and Karen Botterbush, his brother, his wife, their daughter, Zachary and Bre Botterbush, and Adeline; his maternal grandfather, David Dunnagan; his father and mother in law, Rick and Becky Watters, Four sister in laws and their spouses and children: Tracy (Neil) Rose, Keaton and Carter; Casey (Jerry) Klocke, Cooper, Harper, and Sloane, Angela Watters and her children Camden and Kianna, Kristy Watters (Brandon) and Reigh. Jacob enjoyed hunting, fishing, and spending time with his family. He never knew a stranger and always enjoyed talking to anyone. He had a big heart and was always willing to help where he could. Jacob was known for his smile on his face. Jacob earned the rank of Eagle Scout in March 14, 2002. Jacob always worked and sometimes worked multiple jobs to support his family. Before his illness he was employed at Cargill Packaging, Pluesters Meat Market, Subway in Hardin, Dispatcher at Calhoun County Sherriff's Department, Great Rivers Land Trust, and taught swimming to many young children at the YWCA and River Aire Swim Club. Jacob also spent many summers lifeguarding at local swimming pools. Jacob was blessed with a multitude of friends and family. They were his biggest suporters through his life and he loved them all. Jacob was preceded in death by his maternal grandmother, Margaret (Hopper) Dunnagan, paternal grandfather Wilmer Botterbush, paternal grandmother, Dorothy (Arms) Botterbush, uncle, Ray Botterbush. Elizabeth's paternal grandfather, Albert Watters, maternal grandfather, Stephen Tepen, paternal step grandfather, Arthur Pence, infant sister Jamie Watters, and niece Monroe Klocke. Visitation will be held at Gress, Kallal, and Schaaf in Hardin on Wednesday, February 16, 2022 from 4-8 p.m. Mass of Christian Burial will be held at St. Norbets Catholic Church in Hardin on February 17, 2022 at 10:00 a.m. Burial will follow at Indian Creek Cemetary in Hamburg, Illinois. A GoFundMe account was set up to assist Elizabeth with funeral expenses. Memorials can be made to Libby's College Fund.

Dateline: Hardin Jacob Scott Botterbush of Hardin left his earthly home to go to heaven to hunt and fish for eternity. He passed away at his home on February 11, 2022 after a long battle from the side effects of Leukemia. Jacob was born... View Obituary & Service Information

The family of Jacob S. Botterbush created this Life Tributes page to make it easy to share your memories.

Send flowers to the Botterbush family.