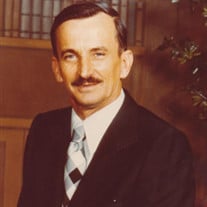 Date Line: Moro, IL Hugh A. Gallagher, 100, formerly of Bethalto, passed away at 7:37 pm on Thursday, July 1, 2021 at Stillwater Nursing Facility in Edwardsville. He was born on June 18, 1921, in Universal, Indiana, the son of Elmer E. and Louie G. (Boswell) Gallagher. He married Marjorie "Margie" June Bell. Together they had five children. She preceded him in death on October 6, 1971. He leaves behind his children, Sharen (Nelson) Nolte of Moro, Vicki (Phil) Engelke of Glen Carbon, Diana (Darrell) Frey of Midway, and Hugh E. (Paula) Gallagher of Pocahontas; a sister, June (Jerry) Link of Edwardsville; a daughter-in -law, Cheryl Gallagher; 13 grandchildren; 19 great-grandchildren; 5 great-great-grandchildren; and several nieces and nephews. Hugh and three of his brothers all served in WWII at the same time. Mr. Gallagher was a Motor Machinist 1st Class in the United States Navy. He was a part of ARG4 and worked in Amphibious Repair where he dealt with operating and repairing the engines of landing vessels in the Pacific Theater. His tour took him to the Philippines and the Solomon Islands off the coast of Australia in the Pacific. He was also involved in underwater demolition. This job required searching under water for hidden mine fields allowing the ships safe passage. During his tour, his ship dropped anchor at Yap Island in the South Pacific between the Philippines and Australia. It was a small island about the size of an airport runway. They had a movie projector and a movie for the men to watch for some much-needed R&R. The bombing started when the Japanese saw the lights and knew it was the U.S. forces. Hugh was stationed in China when the war was over and was the recipient of a WWII Victory Ribbon, a Philippine Liberation Ribbon, and an Asiatic/ Pacific Ribbon with 2 stars. Hugh lived at Villa Rose Apartments, an independent retirement home, for several years where he left behind many close and caring friends, before moving to Stillwater Nursing Facility. He was preceded in death by his parents; wife, Margie; four brothers, Lawrence, Jack, Edwin, and Leslie, and a son who passed away this past year, Daniel Gallagher. Per his wishes, cremation rites will be accorded. A celebration of life will be held on Wednesday July 7, 2021 from 5:30 pm until time of service at 7:30 pm, at Elias, Kallal and Schaaf Funeral Home in Bethalto. A private family burial will be at a later date where he will be placed beside his loving wife, Margie, at Alton City Cemetery. Memorials can be made to the Alzheimer’s Association or Wounded Warriors.

Date Line: Moro, IL Hugh A. Gallagher, 100, formerly of Bethalto, passed away at 7:37 pm on Thursday, July 1, 2021 at Stillwater Nursing Facility in Edwardsville. He was born on June 18, 1921, in Universal, Indiana, the son of Elmer E. and... View Obituary & Service Information

The family of Hugh A. Gallagher created this Life Tributes page to make it easy to share your memories.

Send flowers to the Gallagher family.