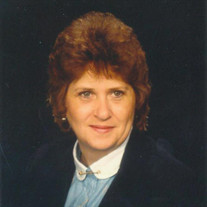 Dateline: Cottage Hills, IL Helen C. Null, 77, of Cottage Hills, passed away on Thursday, December 30, 2021, at 4:12 pm at Jerseyville Manor. She was born on September 28, 1944, in Wood River Township the daughter of late Anton and Lettie... View Obituary & Service Information

The family of Helen Christine Null created this Life Tributes page to make it easy to share your memories.

Send flowers to the Null family.