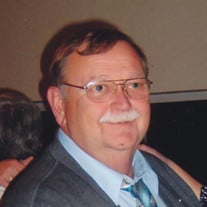 Harley Eugene Hicks, 73, passed away Wednesday, May 5, 2021 at Barnes-Jewish Hospital in St. Louis, MO. He was born on October 22, 1947 in Wood River, IL, the son of Harley L. and Opal Ellen (Eaker) Hicks. Harley married Betty Jean Mansholt on October 4, 1980 in Cottage Hills. She preceded him in death on October 18, 2019. He worked as a painter and was initiated into Local 471 on May 31, 1977, eventually acting as a Business Agent. He owned and operated Our Cliffside Inn. He was actively involved in the community and belonged to several clubs and organizations, including Shriner’s Club and Freemasonry fraternal organization. He was a member of the Alton- Wood River Sportsman’s Club and enjoyed hunting, fishing and boating. Harley is survived by two daughters, Kimberly (David) Dees of Florissant, MO and Jennifer (Brandon) McGuire of Wood River, IL; grandchildren, Harley David Dees, Presley Jean Dees and Kinsley Marie McGuire, a sister, Phyllis Hicks; four sisters-in-law, Cindi Lee, Evelyn (Bill) Ambrose, Mary Ann (Tom) Thompson and Barbara (Paul) Stumpf and several nieces and nephews. In addition to his wife, Betty, Harley is preceded in death by his parents, Harley and Opal Hicks and a brother, Roland Hicks and a brother-in-law, Lynn Simburger. Visitation will be from 4 pm to 7 pm on Monday, May 10, 2021 at Elias, Kallal, and Schaaf Funeral Home in Godfrey, IL. Funeral service will be at 10 am on Tuesday, May 11, 2021 at Elias, Kallal, and Schaaf Funeral Home in Godfrey. Burial will follow at Valhalla Memorial Park in Godfrey. In lieu of flowers, memorials may be made to: Shriner’s Hospital or American Brain Tumor Association.

The family of Harley Eugene Hicks created this Life Tributes page to make it easy to share your memories.

Send flowers to the Hicks family.