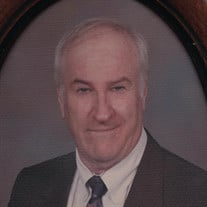 Harlen “Butch” L. Shaw, age 78, of Bethalto, passed away Monday, September 13, 2021 at his home with his family by his side. He was born May 26, 1943, in Bethalto, the son of Harlen and Celia (Schaaf) Shaw. Butch was married to Judith Ward from 1964 to 1975, and she survives. He then married Rhonda Piel on April 10, 1976 and she survives. Butch was proud to have served in the US Air Force and graduated from basic in Texas and was assigned to do decoding in Italy. He worked as a Postman for many years. Butch then became a Postmaster before retiring in 2000. He never stopped learning and was an Instructor at LCCC and SIUE. Butch eventually earned two Master’s Degrees. Butch enjoyed genealogy and history, guitars and music, reading, fishing, photography, and travel. His greatest joys were spending time with his friends and grandchildren. In addition to his wife, Rhonda; he is also survived by three daughters, Sherry Mills, Shelly and Eric Moore, and Rachel (and her significant other, Mike Simburger) Thompson; five grandchildren, Nathan Pearcy, Matthew Moore, Reagan McGibany, Reese Thompson, and Ryder Thompson; two sisters, Wilma and Connie. He is preceded in death by his parents; three brothers, Wayne, Lloyd, and Eldon; and eight sisters, Wanda, Willa, Juanita, Donna, Gayle, Theresa, and Nancy. Visitation will be held Friday, September 17, 2021, from 4:00 to 8:00 pm at Elias, Kallal and Schaaf Funeral Home in Bethalto. Funeral services will be held Saturday, September 18, 2021, at 10:00 am in the funeral home chapel with Pastor Tim Naylor officiating. Burial will take place in Rose Lawn Memory Gardens. In lieu of flowers, memorials may be made to Leukemia and Lymphoma Society.

The family of Harlen "Butch" L. Shaw created this Life Tributes page to make it easy to share your memories.

Send flowers to the Shaw family.