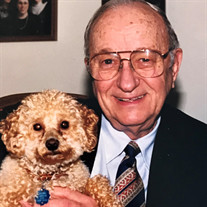 “We are confident, I say, and willing rather be absent from the body, and to be present with the Lord.” 2 Corinthians 5:8 KJV Harlan “Gene” Eugene Nash passed away on Sunday, January 3, 2021. Born in Taylorville, IL on September 22, 1927 to Orrin S. and Mary Nelle (Hanauer) Nash. On June 8, 1984 he married Sue Haycraft in Springfield, IL. He was a graduate of Edinburgh High School and served in the United States Army Air Force during WWII. He was a graduate of Shurtleff College and received his Master’s degree from the University of Illinois, with a Specialist Certificate in Education from SIUE. He taught school in Edinburg and Girard, IL and Wood River-Hartford School District #15 where he became principal of Woodrow Wilson School. He was Superintendent of School District #15 for 15 years before he retired in 1984. He was involved in the Wood River Township Kiwanis Club, Wood River Rotary Club and the Gateway East Chapter of Phi Delta Kappa. After he retired, he volunteered his services to help others in various ways. Gene enjoyed spending his time with family, friends, animals, nature and watching Illini games. He was a member of Westminster Presbyterian Church, Godfrey, IL. He is survived by his wife, Sue, his stepdaughters Jennifer Haycraft, Alton, IL, Michele (Matt) Jones, Godfrey, IL, two grandchildren Abraham and Corrine Jones, sister Margaret Lou Boggs, Springfield, IL, sister-in-law Julia Lee Nash, Peoria, IL, several nieces and nephews, and his lifelong friend Norris Dorsey. He was preceded in death by his parents, his brothers Wendell Nash and Donald Nash, brother-in-law Alvin Boggs, and sister-in-law Genie Nash. Per Gene’s wishes, cremation rites will be accorded. Elias Kallal & Schaaf Funeral Home in Godfrey is entrusted with professional services. A celebration of life will be held at Westminster Presbyterian Church in Godfrey at 10 am Tuesday, January 12, 2021 until time of funeral service at 11 am. Pastor Adrian Das will officiate. A private inurnment will take place at Rose Lawn Cemetery in Bethalto. Memorials may be made to 5 A’s Animal Shelter.

The family of Harlan Eugene Nash created this Life Tributes page to make it easy to share your memories.

“We are confident, I say, and willing rather be absent from the...

Send flowers to the Nash family.