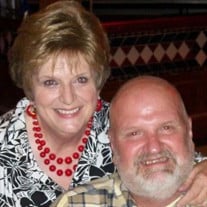 Gregory Weirich, 72, our loving Husband and Father has been called to be reunited with his wife and those of his family who have gone before him in the Kingdom of Heaven. He died at the Alton Memorial Rehabilitation Center on College Avenue at 3:55 pm on December 25. He simply couldn't live without his precious Cathy by his side. They were inseparable for 52 years. Greg was born on June 11, 1949, in Alton. One of eight children born to Albert and Elsie Weirich. He was preceded in death by his loving wife Cathy on October 19, 2021, both parents, an older brother Albert, and a niece Laura Thomas. Surviving family members include Jack (Shirley) Weirich, Jerry Weirich, Marguerite Kathleen Weirich Ashley, Christina (Cissy) Phillips, Tim (Nayda) Weirich and Pamela Rohour. Lots of nieces and nephews whom he adored. Cathy's nephew Michael (Mary) Jenniches of Alton and his children Corey Jenniches and Claire Jenniches. Greg graduated from Alton High School in 1967 and met the love of his life Cathy Scoggins a year later, following a horrific car accident in which he barely survived, and they soon married. Almost overnight and without hesitation, they took in and began to raise all 3 of Cathy's sister’s children. Michael, Nicki, and Laura. He was a devout Catholic and a lifelong St. Mary's parishioner. He said the rosary every day and was steadfast in his faith. In many ways he was larger than life. He was drafted to go to Vietnam but enlisted in the US Navy instead. His accident prevented Greg from serving. He worked part time at Snyder's downtown then began working at Peavey Flour Mill as a sweeper. He remained employed there for 13 years. It was during this time he lost both of his legs. He then moved on to Specialized Services in Alton and worked as a special supervisor for the mentally challenged and remained there for another 13 years. When word spread that the Alton Belle Casino was coming to town, he jumped at the chance to work there, and did until his retirement at age 65. He worked in security as a surveillance/dispatch officer and really enjoyed his job. Greg loved the outdoors, hunting, fishing, and gardening and was an inspiration to all who knew him. He made it a lifelong mission to never allow his physical challenges, after losing both of his legs below the knee, to prevent him from becoming a productive member of society. Being a double amputee never once crushed his spirit and he always had a positive attitude and zest for life. Cremation rites were accorded and a private graveside committal was previously held at St. Joseph Cemetery in Alton. Elias, Kallal & Schaaf Funeral Home in Godfrey was entrusted with professional services. A Memorial Mass will be held, 10 AM, Saturday, January 15, 2022, at St. Mary’s Catholic Church in Alton. In Lieu of flowers, he wished to have masses offered up at St. Mary's Catholic Church for the repose of his soul.

Gregory Weirich, 72, our loving Husband and Father has been called to be reunited with his wife and those of his family who have gone before him in the Kingdom of Heaven. He died at the Alton Memorial Rehabilitation Center on College Avenue... View Obituary & Service Information

The family of Gregory Weirich created this Life Tributes page to make it easy to share your memories.

Gregory Weirich, 72, our loving Husband and Father has been called...

Send flowers to the Weirich family.