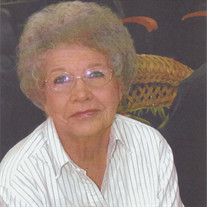 Dateline: Moro, Illinois Goldie Mae Keiser, 88 of Moro, IL passed away on Tuesday, August 10, 2021, at 2:45 pm in Springfield, MO. She was born on June 23, 1933, in Chicota, TX the daughter of Daniel and Ila (Marlar) Parker. On July2, 1955 Goldie married Thomas W. Keiser in San Jose, CA. He preceded her in death on January 22, 2007. Goldie was a member of the Moro Presbyterian Church in Moro, IL. She enjoyed traveling and camping and Cardinals Baseball. Surviving is a son, Thomas Keiser Jr. (Shirley) of Moro, IL; a daughter, Becky Meier (Roger) of Fordland, MO; two grandchildren, Daniel Keiser and Abigail Meier McCown (Kevin), great grandson James Roger McCown; one sister, Katie McCorat (James) of Chicota, TX; and one brother, David Parker (Pat) of Chicota, TX Goldie was preceded in death by her parents; husband, Thomas; four brothers, Clarence, Lawrence, Alvin and Russell Parker; and two sisters, Lee Sax and Allene Boyde. A visitation will be held on Saturday, August 14, 2021 from 9:30 am until the time of service at 10:30 am at the Elias Kallal and Schaaf Funeral Home in Bethalto, IL Burial will follow at Rose Lawn Memory Gardens in Bethalto, IL. Memorials may be made to the Moro Presbyterian Church.

The family of Goldie Mae Keiser created this Life Tributes page to make it easy to share your memories.

Send flowers to the Keiser family.