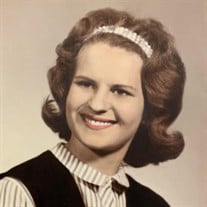 Dateline: Edwardsville Gloria Jean Hall, 75, of Edwardsville, passed away on Monday, December 28, 2020 at 10:55 pm, at her home surrounded by family. She was born on February 1, 1945 in Alton, IL, the daughter of Arthur and Fern (Gaither) Volz. She married Howard D. Hall on July 18, 1964 at St. Kevin’s Catholic Church in Rosewood Heights. Gloria often spoke about her time as a nurse’s aide at St. Anthony’s Hospital, where she worked until the birth of her 3rd child. She was also employed at Olin while her husband Howard served in Vietnam. Gloria dedicated her life to caring for her daughter Tonya, who suffered a traumatic brain injury in 1995. From not leaving her daughters side for months while hospitalized, to making sure she lived the best life every single day, Gloria was the very definition of an amazing mother. She also loved to spend every minute possible with her grandchildren. Gloria was a lifelong member of Our Lady Queen of Peace Catholic Church in Bethalto, IL. Gloria also volunteered several years to teaching catechism classes (formally known as CCD) at the church, which helped provide religious education for children who attended public schools. Along with her husband, Howard, she is survived by her children, Tonya Hall of Edwardsville, Tina Hall of Edwardsville, and Rodney (Shandale) Hall; a brother, Michael (Alice) Volz of Cottage Hills; and five grandchildren, Elizabeth, McKenzie, Ian, Faith and Carter. Gloria was preceded in death by her parents; a brother, Gary Volz; and a sister, Janice “Kay” Sanchez. Visitation will be on Saturday, January 2, 2021 from 9:30 am until time of Mass at 11 am, at Our Lady Queen of Peace in Bethalto, where Father Tom Liebler will officiate. Burial will follow at Rose Lawn Memory Gardens. Elias, Kallal and Schaaf Funeral Home in Bethalto is in charge of arrangements. Memorials can be made to Mercy Cancer Center in Maryville, IL. Online condolences and guest book may be found at www.eliaskallalandschaaf.com

Dateline: Edwardsville Gloria Jean Hall, 75, of Edwardsville, passed away on Monday, December 28, 2020 at 10:55 pm, at her home surrounded by family. She was born on February 1, 1945 in Alton, IL, the daughter of Arthur and Fern (Gaither)... View Obituary & Service Information

The family of Gloria Jean Hall created this Life Tributes page to make it easy to share your memories.

Send flowers to the Hall family.