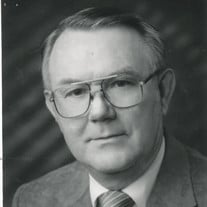 Dateline: Bethalto, IL Glen R. Phelps, 88, of Bethalto, passed away on Sunday, August 29, 2021, at 3:58 am at Riverside Nursing and Rehab. He was born on January 5, 1933, in Eldorado, IL the son of Cletus and Emma (Reichelderfer) Phelps. On July 14, 1951, Glen married Barbara Watson in Arkansas. She preceded him in death. Glen served his country in the United States Army in Frankfurt, Germany during the Korean Conflict. After the Army he went to work for Shell Oil as an Engineer. He was a long- time member of Bethel General Baptist Church and most recently the First Baptist Church of Fosterburg. Glen enjoyed fishing, watching St. Louis Cardinal baseball games, singing with his brothers, and spending time with his family and grandchildren. He is survived by two grandchildren, Adam Coleman (Lindsay) of Edwardsville, IL and Brittany Coleman of Michigan; two great grandchildren, Mason and Miles Coleman; two brothers, Raymond Phelps of Travor City, MI and Bill Phelps (Irene) of Olney, IL; and three sisters, Marie Smith of Eldorado, IL, Emma Lee Smith of McLeansboro, IL, and Lilly Faye Rippy (Tom) of Rockingham, NC. In addition to his parents, he was preceded in death by his wife, Barbara; a daughter, Lisa Hayes; three brothers, Claude, Charles and Carol Phelps; and two sisters, Dean Bowen and Lotus Wagner. Due to Illinois State Covid regulation and mask mandate masks must be worn inside of the building. Visitation will be Thursday, September 2, 2021, from 4:00 pm until 7:00 pm at the Elias Kallal and Schaaf Funeral Home in Bethalto, IL with the Rev. Ray Phelps officiating. Funeral Services will be held on Friday, September 3, 2021, at 11:00 am at the Elias Kallal and Schaaf Funeral Home in Bethalto, IL Burial will follow at Rose Lawn Cemetery in Bethalto, IL. Memorials are suggested to the American Cancer Society or the Alzheimer’s Association.

The family of Glen R. Phelps created this Life Tributes page to make it easy to share your memories.

Send flowers to the Phelps family.