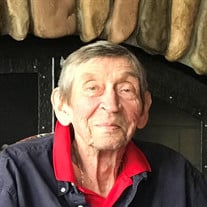 To accommodate family and friends impacted by travel restrictions and occupancy constraints, the funeral service will be available via live stream on our Facebook page beginning 1 PM CST. Please follow this link to join the live viewing, or... View Obituary & Service Information

The family of George M Lammers created this Life Tributes page to make it easy to share your memories.

To accommodate family and friends impacted by travel restrictions...

Send flowers to the Lammers family.