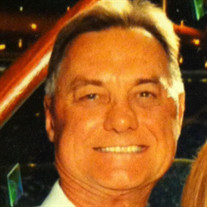 Gary Bennett Linn, 69, passed away peacefully at 2:58 p.m. on Wednesday, September 15, 2021, at Alton Memorial Hospital with his family by his side. He was born on April 9, 1952, in Christopher, Illinois, to Gordon and Rosalie (Reed) Linn. After his father’s passing, he was raised by his stepfather, Ronald A. Adams, who also preceded him in death. Gary married J.R. Rose on August 5, 1985, at Little Church of the West in Las Vegas, Nevada, and she survives. Don’t worry, it was a cheap wedding and everyone who knows him will understand and chuckle. He was a 1970 graduate of Wood River High School and attended some college. On June 1, 1973, Gary was initiated as an Apprentice into Ironworkers Local 392 and retired in 2004. He was an avid waterfowl hunter who always looked forward to building the duck blind with his buddies. The first day of duck hunting for him each year was like Christmas morning to a kid. He had one particular hunting dog (Callie) who greeted everyone at the duck hunting Check Station each morning where she made sure they all knew and loved her. When the hunters saw Callie make her way into the Check Station, they knew Gary Linn had arrived. He also enjoyed being on the water fishing, whether it was in a canoe on the creek with his Father-in-Law, on a river or lake, or the deep seas near Panama. His yearly garden overflowed with tomatoes, and you were one of the lucky ones if you received a jar of his ‘famous’ salsa. In addition to his wife, J.R., he is survived by his Mother, Rosalie Adams of Bethalto; three stepchildren and their spouses, Amanda and Rick Neal of Conway, Arkansas, Jason Rose of Peel, Arkansas, and Candace and Clyde Whiddon of Greenbrier, Arkansas; two sisters and their husbands, Diana and Bob Rogers of Saint Peters, Missouri and Debby and Dan Relling of Bridgeton, Missouri; three step grandchildren, Stephanie and Max Sullivan of Prescott, Arkansas, JB Shaw of San Antonio, Texas, and Addy Rose of North Little Rock, Arkansas; one niece, Melissa Catlin of O’Fallon, Missouri; as well as many other relatives and more friends than one could count. There will be no services per his wishes. In lieu of flowers, the family has requested memorials be made to the American Heart Association or the National Kidney Foundation in Gary’s name and will be accepted at the funeral home. Elias, Kallal and Schaaf Funeral Home in Bethalto will oversee arrangements.

Gary Bennett Linn, 69, passed away peacefully at 2:58 p.m. on Wednesday, September 15, 2021, at Alton Memorial Hospital with his family by his side. He was born on April 9, 1952, in Christopher, Illinois, to Gordon and Rosalie (Reed) Linn.... View Obituary & Service Information

The family of Gary Bennett Linn created this Life Tributes page to make it easy to share your memories.

Send flowers to the Linn family.