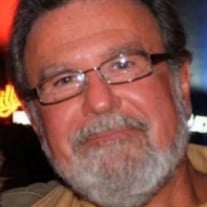 Dateline: Bethalto, IL Gary L. Stock, 72, of Bethalto, IL, passed away unexpectedly on Monday, February 14, 2022, at Alton Memorial Hospital alongside his family. He was born on July 24, 1949, in Alton, IL, the son of the late Arthur and Viola (Plummer) Stock. In 1982, Gary was married to Constance “Connie” L. Levey in Edwardsville, IL. They would be celebrating their 40th anniversary on April 15, 2022. Gary was the owner and operator of Gary Stock Autobody in Wood River for more than 15 years. He then worked for Mallinckrodt for another 15 years where he then retired. Gary loved traveling with his wife and friends. He was a member of the FBI (Fat Boys Illinois) car club and enjoyed riding his Harley. Gary was a car enthusiast and could be found working on old cars in his garage during his free time. He also enjoyed spending time with his friends and family, especially his grandchildren. He was known by his favorite people as, MoMo or Pawpaw. Along with his wife, Gary is survived by his 2 children and their spouses, Terry Lee (Janelle) Stock of East Alton, and Nicole (Steve) Mitchell of Alton; 3 grandchildren and their spouses, Kaitlyn (Ryan) Stalcup, Paije (Jason) Hamilton, and Deyton (Jordan) Gress Mitchell; 4 great grandchildren, Kolten, Eleanor, Cash, and Hank; 2 sisters and their spouses, Janet (Steven) Hughes of Fosterburg, and Debra (Phil) Tite of Bethalto; and father-in-law, Richard Kreider of Bethalto. Celebration of Life will be from 1:00 pm until the time of service at 4:00 pm on Sunday, February 20, 2022, at Elias, Kallal and Schaaf Funeral Home in Bethalto with Pastor Ted Burlson officiating. A private burial will occur at a late date at Rose Lawn Memory Gardens. Memorials can be made to St. Louis Children’s Hospital.

Dateline: Bethalto, IL Gary L. Stock, 72, of Bethalto, IL, passed away unexpectedly on Monday, February 14, 2022, at Alton Memorial Hospital alongside his family. He was born on July 24, 1949, in Alton, IL, the son of the late Arthur and Viola... View Obituary & Service Information

The family of Gary L. Stock created this Life Tributes page to make it easy to share your memories.

Send flowers to the Stock family.