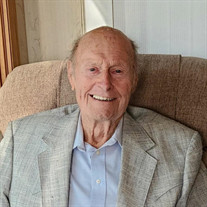 Dateline: Bethalto, IL Frederick Edward (Fritz) Aljets, 95 years old, passed away at 6:02 pm on Thursday March 24, 2022, at his residence in Holiday Shores. Born March 21, 1927, he was the son of Edward and Elizabeth (Johnson) Aljets of Dorsey. On June 21, 1949, he married Verline Rose Homm. She preceded him in death in February of 2021. Surviving are 4 children and their spouses. Scott (Susan) of Dorsey, Rocky (Bobbi) of Bunker Hill, Dawn of Gunnison CO., and James (Beth) of Staunton. The eldest sibling, Michael (Diane) of Aztec NM, passed away in 2020. Also surviving are 2 sisters: Ruth Kuethe of Alton and Mary Bixen of Dorsey. Two sisters, Marguerite Fechte and Ester Hoffstetter proceeded Fritz in death. Fritz and Verline had 9 grandchildren, 10 great grandchildren, and 3 great-great grandchildren. Fritz and Verline were owners and operators of Aljets Garage, Dorsey, which was established in 1949 and expanded to a second Garage in Staunton in 1988. Fritz belonged to and supported trade groups including Independent Garage Owners of Illinois, Automotive Service Association, and Alliance of Automotive Service Providers. Fritz was one of the founders of the Fosterburg Water District and was a board member for 51 years, serving as Chairman of the Board for 34 of those years. Fritz was also one of the founding members of the Dorsey Volunteer Fire Department, a company within the Bunker Hill Fire Protection District. He held many positions since 1956, including Fire Chief, for many years. A lifelong member of Emmaus Lutheran Church in Dorsey, he also filled a variety of roles within the church. Fritz served his country as a sailor in the United States Merchant Marines at the end of World War II. He was one of the few that circumnavigated during his tour of duty. Fritz and Verline enjoyed traveling, camping, and taking trips in their motorhome. Visitation will be on Thursday, March 31, 2022, from 4 to 7 pm at the Elias Kallal and Schaaf Funeral Home in Bethalto. Services will be on Friday, April 1, 2022, at 11 am with Pastor David Kern officiating at Emmaus Lutheran Church in Dorsey. Burial will follow at Emmaus Lutheran Cemetery. Elias, Kallal and Schaaf Funeral Home in Bethalto is in charge of arrangements. Memorials can be made to the Emmaus Lutheran Church or the Dorsey Volunteer Fire Department. Online condolences and guest book may be found at www.eliaskallalandschaaf.com

Dateline: Bethalto, IL Frederick Edward (Fritz) Aljets, 95 years old, passed away at 6:02 pm on Thursday March 24, 2022, at his residence in Holiday Shores. Born March 21, 1927, he was the son of Edward and Elizabeth (Johnson) Aljets of Dorsey.... View Obituary & Service Information

The family of Frederick "Fritz" Edward Aljets created this Life Tributes page to make it easy to share your memories.

Send flowers to the Aljets family.