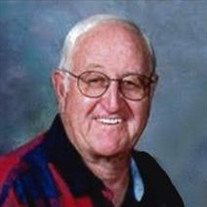 Franklin “Spider” Dunphy, age 94, passed away on December 27, 2021, due to complications from a stroke. Up until July of this year he lived on his own, in his own house and truly relished his independence. Spider was born in Alton on July 16, 1927, to Ruth and John Dunphy. He was the 4th of 6 children. He graduated from Alton High School in 1945 and the following year went into the Marine Corps at Paris Island, South Carolina. He was a plasterer by trade and worked on many homes in the Alton metro area. He was very proud of his work and always pointed out the homes he worked on. He was an avid sports fan and had season tickets to the St. Louis Cardinals football team and always proud to say he sat next to Lou Brock. He enjoyed golf and spent many days playing rounds at Rock Springs with his older brother Jack and friend Jiggs Yost. He married Shirley King on August 16, 1957, and they raised 5 children. Spider and Shirley loved to travel and took many driving vacations across the country. Las Vegas seemed to be a favorite spot and especially enjoyed the buffet at Bellagio’s. He could be spotted around town in his trademark “bucket hat” and everyone knew him as Spider. He had many experiences in his life with his family and friends. If you heard him say “did I ever tell you about the time….” you needed to sit back and be prepared for some funny stories. He was preceded in death by his parents, his siblings, Jack, Becky, Norma, Tom and Mary Lou as well as his beloved wife, Shirley, who were all waiting to greet him in heaven. He is survived by his children, Bridget (Bill) Riley of Clive IA; Maureen Dunphy of Chicago, IL; Chris (Janice) Dunphy of Godfrey, IL; Kevin (Elizabeth) Dunphy, of Sugar Grove, IL; Erin Dunphy, of Berwyn, IL. He is also survived by his grandchildren and their children: Abby (Tyler) Cropp and son Macoy; Jenna (Adam) Miller and daughter Cora and son Maddox; Brendan (Nicole Irvine) Dunphy, Sean (Shayna Tucek) Dunphy; Nicholas Dunphy, and fiancée, Rebecca Spencer, Natalie (Josh) Thacker and daughters Lilly and Evelyn. Additionally, he is survived by a brother-in-law, Denver McCollum of Alton, IL. Visitation will be 9:30 AM until time of Funeral Mass at 11 AM, Thursday, December 30, 2021, at St. Mary’s Catholic Church in Alton. Burial will follow at St. Joseph’s Cemetery in Alton. In keeping with COVID protocols and guidelines, the family requests masks to be worn and appropriate social distancing be maintained. In lieu of flowers, donations can be made to St. Mary’s Church.

Franklin &#8220;Spider&#8221; Dunphy, age 94, passed away on December 27, 2021, due to complications from a stroke. Up until July of this year he lived on his own, in his own house and truly relished his independence. Spider was born in Alton... View Obituary & Service Information

The family of Franklin "Spider" R. Dunphy created this Life Tributes page to make it easy to share your memories.

Send flowers to the Dunphy family.