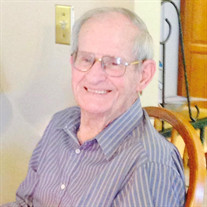 Dateline: Moro Frank L. Hueneger, 91, of Moro passed away on Wednesday, February 10, 2021 at 6:30 am at Alhambra Rehab and Healthcare. He was born on November 14, 1929 in Moro, IL, the son of Frank E. and Bessie C. (Lanterman) Hueneger. On October 2, 1954 Frank married Joyce R. Hunt at Bible Baptist Church in Cottage Hills, she preceded him in death in 1989. He served his country in the United States Army. Frank worked as a mail carrier for the United States Postal Service for many years. He was a member of the Bible Baptist Church in Cottage Hills, for many years. He was considered a fixture at Handee- Mart, where he enjoyed hanging out and people watching. Frank enjoyed golfing, photography, and shooting gophers in Montana. He is survived by his son, John Hueneger (Lori) of Bethalto, IL; two grandchildren, Lindsay Slover (Eric) of East Alton and Drew Hueneger (Jenna) of Bethalto; a great granddaughter, Ariana Joy Slover; and a sister, Melinda “Winne” Whitaker of Wood River. Frank was preceded in death by his wife, Joyce; parents; and a sister, Jennie Hueneger. Visitation will be Saturday, February 13, 2021 at 10:00 am until the time of service at 11:00 am at Elias Kallal and Schaaf Funeral Home in Bethalto, IL. Memorials may be made to the American Cancer Society.

The family of Frank L. Hueneger created this Life Tributes page to make it easy to share your memories.

Send flowers to the Hueneger family.