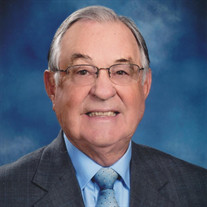 Dateline: Bethalto Emery N. Dial, 90, of Bethalto, passed away on Sunday, March 21, 2021 at Alton Memorial Hospital. He was born on December 6, 1930 in Hamilton County, IL, the son of John and Vernie T. (Galbraith) Dial. He married Carolyn “Sue” (Clinton) in East Alton on June 15, 1957. Emery is a Veteran of the United States Army and served during the Korean Conflict, he also went on an Honor Flight to Washington, DC. He went to U of I and earned his Civil Engineer Degree. He worked for Standard Oil, the State of Illinois, then worked for Monterey Coal (Exxon) until his retirement in 1986. Emery was of the Baptist faith. He enjoyed golfing, singing in the church choir, working out in the yard, and spending time with his family and friends. Survivors include his daughters, Cindy (Tim) Geil of Waco, TX and Cheri (Jim) Hartsock of Bethalto, IL; four grandchildren, Jared (Danielle) Hartsock, Brian (Katrina) Hartsock, Erin (Graham) Musgrove, and Kelli Geil; eight great-grandchildren, Gabrielle, Ava, Cooper, Evan and Nash Hartsock, and Nolan, Hank and Ada Jane Musgrove; a brother, Don (Marilyn) Dial; a sister, Frieda Rhodes; and several nieces, nephews, cousins and friends. Along with his parents and wife, Sue; he was preceded in death by two brothers, John O. Dial and James Dial. A private service will be held for the family. Burial will take place at Rose Lawn Memory Gardens. Elias, Kallal and Schaaf Funeral Home in Bethalto is in charge of arrangements. Online condolences and guest book may be found at www.eliaskallalandschaaf.com

The family of Emery N. Dial created this Life Tributes page to make it easy to share your memories.

Send flowers to the Dial family.