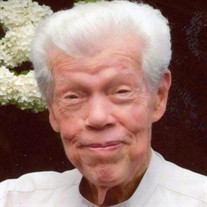 Dateline: Staunton Elton R. Best, 92, beloved husband, went to be with the Lord on Wednesday, January 26, 2022, at 3:40 pm. He was born in Staunton, IL, on August 2, 1929, the son of Charles R. and Carrie E, (Hebenstreit) Best. He married Norma J. Sherfy on June 16, 1949, in Staunton at the Methodist Church in Staunton. Elton worked at Kroger’s as a meat cutter for many years and then at Bahn Grocery Store in Staunton as well. He was a member of 1st Assembly of God in Litchfield, IL. He enjoyed singing and playing drums in his church. He also enjoyed spending time with his family, friends, his beloved dog, Ginger, and his two grand-pups, Joey and Peewee. Along with his wife, Norma, he is survived by a daughter, Dawn (Dennis) Kieffer of Staunton; four grandchildren, Kory (Tammy) Best, Lindsey (fiancé Micah Reitz) Wulfing, and Tony Kieffer; and seven great-grandchildren. Elton was preceded in death by his parents; a son, Terry Best; a grandson, Tyler Best; and three brothers, Kenneth Best, Gilbert Best, and Wilbert Best. There will be no services. Elias, Kallal and Schaaf Funeral Home in Bethalto is in charge of arrangements. Memorials can be made to the Wounded Warriors project. Online condolences and guest book may be found at www.eliaskallalandschaaf.com

The family of Elton R. Best created this Life Tributes page to make it easy to share your memories.

Send flowers to the Best family.