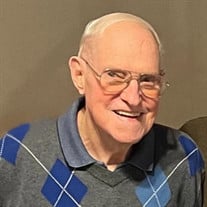 Elmer William Lehr, age 90, of Kampsville, Illinois: passed away Sunday April 24th, 2022 at his home surrounded by his family. He was born on May 31st, 1931, to WIlliam and Rosa Lehr and was one of five children. Elmer graduated from Kampsville High School, class of 1949. On October 2nd, 1954, Elmer married his wife June (Newnom) and had six children: Sandy, Sharon, Bobby, Diane, Jim and Rich. Elmer was a Veteran of the United States Army, where he served in the Korean War. In 1957 Elmer became an Illinois State Trooper and was selected as one of the first Safety Education Officer’s for ISP. He was later elected the Sheriff of Calhoun County from 1991 to 1995. He was a member of the Fraternal Order of Police and an active member of the American Legion Post 1083. He was also a volunteer fireman for North Calhoun Fire District. Elmer enjoyed spending time with his wife and attending his grandchildren and great grandchildren’s events. He enjoyed sports and was an avid softball player and a loyal Cardinal’s fan. Elmer had a sharp memory and loved reminiscing and telling stories about his life experiences. Other hobbies included completing jigsaw puzzles and riding his bike. Elmer was a wonderful husband, father and grandfather. He took pride in being a father but was especially proud to be a grandpa. Elmer was preceded in death by his son, Bobby, a brother Eugene, sister Bernice, and sister Junie. He is survived by his wife June, a sister, Edie, daughter Sandy Jentsch (Dan), daughter Sharon Hagen (Al), daughter Diane Holland, son Jim Lehr (JoAnn), and son Rich Lehr (Liz). Also survived by 11 grandchildren: Amy, Alicia, Lucas, Ben, Logan, Douglas, Leigha, Brittany, Lexis, Macie and Madison. And 9 great grandchildren: Thomas, Allison, Tanner, Liam, Hadley, Kylie, Lila, Stella and Owen. A private service and burial will be held for his family and close friends. The family invites the public to attend a celebration of life following the burial at the Kampville American Legion at 12 pm on Saturday, April 30, 2022. Online condolences and guest book may be found at www.eliaskallalandschaaf.com

Elmer William Lehr, age 90, of Kampsville, Illinois: passed away Sunday April 24th, 2022 at his home surrounded by his family. He was born on May 31st, 1931, to WIlliam and Rosa Lehr and was one of five children. Elmer graduated from Kampsville... View Obituary & Service Information

The family of Elmer William Lehr created this Life Tributes page to make it easy to share your memories.