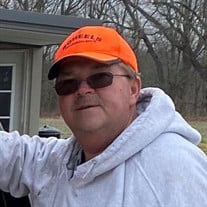 Edward “Eddy” J. Holder, 64, of Edwardsville, passed away on Thursday, January 20, 2022, at his residence. He was born on November 10, 1957, in Granite City, IL, the son of James E. and Betty D. (Crowder) Holder. He married Teri M. Williams on April 25, 1998, at Eden United Church of Christ in Edwardsville. Ed graduated from Granite City North in 1975 and earned his Bachelor’s Degree in Business from SIUE. He worked at Supervalu Warehouse for over 25 years before his retirement in November of 2018. He was a member of the Eden United Church of Christ and Teamsters Local #688. He enjoyed fishing, hunting, lake life, boating, watching his kids in their sports events and most of all, spending time with his family and friends. Along with his wife, Teri, he is survived by his children, Kara Holder, Jena Holder, and Jake Holder all of Edwardsville; a sister, Cynthia Owens of Freeburg, IL; his father-in-law, Homer Williams of Bethalto; a niece, Kari Owens of Freeburg, IL; and a great-niece, Delilah Tutza. Ed was preceded in death by his parents; his mother-in-law, Pamela Williams; a brother-in-law, Lee Owens; and a nephew, Michael Owens. Visitation will be on Monday, January 24, 2022, from 4 to 7 pm at Elias, Kallal and Schaaf Funeral Home in Bethalto, where funeral services will also be held on Tuesday, January 25, 2022, at 10 am with Pastor Terry McKinzie as officiant. Burial will follow at Sunset Hills Cemetery in Edwardsville. Memorials can be made to Quail Country Hunts in Mulberry Grove and/or 5A’s. Online condolences and guest book may be found at www.kallalandschaaf.com

The family of Edward "Eddy" J. Holder created this Life Tributes page to make it easy to share your memories.

Send flowers to the Holder family.