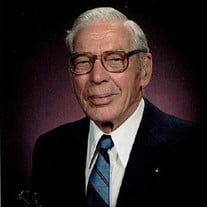 Dateline: Alton, IL Earl D. Schmidt, 91, of Alton, IL passed away on Sunday, September 5, 2021, at 12:35 pm at Alton Memorial Rehabilitation. He was born on August 4, 1930, in Alton, IL the son of Edward H. and Julia (Bockstruck) Schmidt. On January 21, 1951, Earl married Shirley Chappell at the Evangelical and Reform Church. Earl served his country in the United States Army during the Korean Conflict for 14 months. He was a member of the Alton VFW Post 1308 military ritual team, The Alton Wood River Sportsman Club, and the Franklin Masonic Lodge #25. He was a Past Master Council Member of the Order of DeMolay, on the DeMolay Advisory Board, and on the Court of Chevaliers. He ran a home building and remodeling business with his father and then independently until his retirement. Earl was a lifelong avid hunter. In addition to his wife, Shirley; he is survived by his children, James Schmidt (Dana) of Palatine, IL, Carla Schwarz of Belleville, IL, Carol Schmidt (Roger McFarland) of St. Louis, MO; and Ann Kolarik (Bruce) of Wichita, KS; grandchildren, Mark Schmidt (Stephanie), Dale Schmidt, Sara Schmidt, Melissa McFarland (Sam Sparks), Thomas McFarland, and Matthew Schwarz; a great granddaughter, Josephine Schmidt; a sister, Ethel Goble of Brighton, IL; and a family friend, Betsey Anderson. Earl was preceded in death by his parents, and a brother, Edgar Schmidt A visitation will be held on Friday, September 10, 2021, from 5:00 pm until 7:00 pm at the Elias Kallal and Schaaf Funeral Home in Alton, IL at 2521 Edwards St. in Alton, IL. Funeral Services will be held on Saturday, September 11, 2021, at 10:00 am at the Evangelical United Church of Christ in Godfrey, IL at 1212 W Homer M Adams Pkwy in Godfrey, IL 62035. Graveside services will be private. Memorials may be given to the Evangelical United Church of Christ in Godfrey or the Leukemia and Lymphoma Society.

The family of Earl D. Schmidt created this Life Tributes page to make it easy to share your memories.

Send flowers to the Schmidt family.