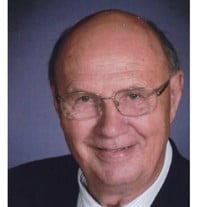 Duane Francis Mossman, 83, passed away at home in the early morning of Monday May 30th, 2022, following a yearlong battle with metastatic renal cancer. His loving wife of 58 years, Yvonne (Weigel) Mossman, was at his side. His daughter and grandchildren were also home with him. Duane also suffered with Parkinson’s disease for more than 10 years. Duane was born January 2, 1939, in Brussels, IL to parents Frank and Evelyn (Elder) Mossman and was the eldest of their 3 children. He grew up in Brussels, attending St. Mary’s Catholic School and graduated from Brussels High School in 1957. He loved sports his entire life and was a valuable player on the high school basketball team. He attended Saint Louis University in St. Louis, MO, and obtained undergraduate and graduate degrees in elementary and secondary education. He was a highly dedicated and cherished teacher and administrator in the Alton Public School District for more than 37 years, beginning his career as a 6th grade history teacher at Lincoln School in 1964. He served as Assistant Principal at both North and West Middle Schools and Principal at McKinley, Gilson Brown, and Thomas Jefferson schools. He retired in 2001 and continued to serve the Alton School District as a truancy officer for nearly 10 years with his friend and colleague Ron Fedorchak. He was admired by his colleagues, staff and students for his evident passion and enthusiasm for education and getting the best out of all those he worked with. Everywhere he went, students and their parents alike would share how much they appreciated his service and the impact he had on their lives. He will be dearly missed by all those whose lives he profoundly touched including his family, his students, his many friends and members of St. Ambrose Catholic Church in Godfrey IL and community. He was a role model to many and a great friend to even more. He was the type of man that would say “hello” to every person he passed and volunteer to help anyone out, all the way through to his final days. Duane and Yvonne have been active members of St. Ambrose Catholic Church, IL for more than 50 years, where he served as an usher and Eucharistic Minister. He was an avid fan of the St. Louis Cardinals, the Saint Louis University 2022, basketball team, and supported every college team where any of his grandchildren attended. He thoroughly loved working in his yard, planting flowers and creating a beautiful sanctuary for the wildlife that lived around their home. They had talented 2 daughters, Lisa (Angelo) L’Abbate of Chicago and Lori (John) Wakefield of Charleston, SC. He enjoyed a close-knit family and spent lots of time with sister, Elaine (Jack) Snyders, and brother, Greg Mossman, of Bellville, and numerous nieces and nephews. Duane was preceded in death by his parents, Frank and Evelyn, and by his daughter Lisa L’Abbate. He is survived by his wife, Yvonne, daughter Lori (John) Wakefield of Charleston, SC, son-in-law Angelo L’Abatte of Chicago IL, granddaughter Allison Yatvin of Alton, and six grandsons, Philip (Elizabeth) Yatvin, Luciano and Frankie L’Abbate, all of Chicago, IL, Patrick and Michael McMahon of Birmingham, AL, and Collin (Elisa) McMahon of Huntsville, AL. A Prayer Service will be held 4pm, Friday, June 3, 2022, followed by Visitation until 7pm at Elias, Kallal & Schaaf Funeral Home in Godfrey. A Mass of Christian Burial will be held 10am, Saturday, June 4, 2022, at St. Ambrose Catholic Church in Godfrey. Father Steven Janoski Celebrant. Burial will follow at St. Patrick’s Cemetery in Godfrey. Memorials can be given to St. Ambrose Church and School in Godfrey, the Parkinson’s Foundation (parkinson.org), The Michael J Fox Foundation (michaeljfox.org), or the Kidney Cancer Association (kidneycancer.org)

Duane Francis Mossman, 83, passed away at home in the early morning of Monday May 30th, 2022, following a yearlong battle with metastatic renal cancer. His loving wife of 58 years, Yvonne (Weigel) Mossman, was at his side. His daughter and grandchildren... View Obituary & Service Information

The family of Duane Francis Mossman created this Life Tributes page to make it easy to share your memories.

Duane Francis Mossman, 83, passed away at home in the early morning...

Send flowers to the Mossman family.