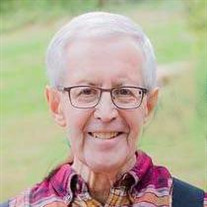 Dr. Edward J. Harrow, 78, of Godfrey, IL, passed away on Friday, December 3, 2021, at 12:43 pm at his home with his family by his side. He was born on December 31, 1942, in Chicago, IL to Joseph and Dorothy (Sachs) Harrow. His father was a successful attorney and judge, and his mother was a politically active social worker in the Chicago area. He grew up in the heart of South Chicago, where he attended an experimental lab program for primary school. He completed his undergraduate studies at the University of Chicago and received his Medical Doctorate from the University of Virginia School of Medicine in 1970 where he completed both his internship and residency. He finished his medical training as an anatomic and clinical pathology specialist at Sloan-Kettering Memorial Hospital in 1975. Edward served in the United States Army, where he was an instrumental member of the MASH (Mobile Army Surgical Hospital) Unit stationed in Seoul, South Korea. He met his wife, Georgina Harvey, while serving overseas, and they were subsequently married in 1977. She preceded him in death on November 8, 2014. Edward contracted with Alton Memorial Hospital, along with his partner Dr. Jeffery Kiviat, as their in-house pathologist and served the greater St. Louis/Alton/Godfrey area until his retirement in 2009. Edward was a family-oriented, talented, and unpretentious man. The cornerstone of his family, Edward was the wise sage that gently guided his loved ones away from troubled waters. He was a man of science and integrity, and had a penchant for traveling, sailing, and target shooting before illness stole his energy. He was a member of the local Rotary Club and was a well-known and respected pillar in his community until his death. He was the best of men, and the world dimmed at his passing. He is survived by his sons, Daniel (Younghye Heo) Harrow of Godfrey, IL, David (Heather) Harrow of O’Fallon, MO, and Adam (Emily) Harrow of Richmond Heights, MO.; grandchildren, Andrew, Jay, Preston, Silas, Cecilia, and Julianna Harrow; and a cousin, Wendy Sachs of California. Per his wishes, cremation rites were accorded. Professional services were entrusted by Elias, Kallal and Schaaf Funeral Home in Godfrey. A private burial will take place at Valhalla Memorial Gardens. Memorials may be made to the American Cancer Society.

The family of Dr. Edward J. Harrow created this Life Tributes page to make it easy to share your memories.

Send flowers to the Harrow family.