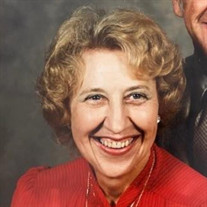 Dateline: Golden Eagle Dorothy May Kinder, 97, began her final journey to her heavenly home on January 5, 2022. Dorothy was born on July 24, 1924, in Detroit, MI, to parents Frederick and Ida Saleske. She married Edgar E. Kinder on March 2, 1946, in Dearborn, MI, moved back to Golden Eagle, IL and together raised three sons and shared 44 years of devoted marriage before his sudden death in December 1990. One of Dorothy’s greatest passions, second only to her family, was music (piano and singing). Yet, a “city” girl who turned “country”, she was the happiest in her kitchen; cooking, baking, and canning from there immense garden, then mending and darning for her boys. With her husband, she became active lifelong member of St. Matthew’s Lutheran Church and Dorcas Society in Brussels, IL. Dorothy is survived by her sons David, Randall, and Mark (Claudia), two grandsons, Adam (Audrey) Kinder and Joshua, two granddaughters, Sarah (Eric) Allen and Emily, and five great-grandsons. In addition to her parents and husband, she was preceded in death by her younger sister, Carol (Donald) Rebb. Visitation will take place Wednesday January 12, 2022, from 10:00 to 11:00 a.m. at St. Matthew’s Lutheran Church in Brussels, IL. Funeral service will immediately follow at 11:00 a.m. at St. Matthew’s Church. Burial will follow at St. Matthew’s Cemetery. In lieu of flowers, memorials may be given to one’s personal choice.

The family of Dorothy May Kinder created this Life Tributes page to make it easy to share your memories.